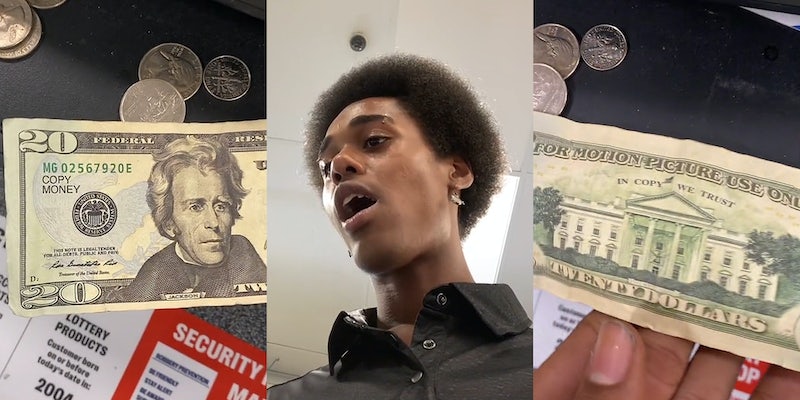 ‘I’m about to get f*cking fired’: Worker accidentally accepts fake $20 bill that says ‘in copy we trust’ on it

'The first one got by me, and I just put it to the side. But the second one, I caught.'

A TikToker went viral this week after claiming they were paid with a counterfeit $20 bill. While the bill looked real from a distance, upon closer inspection, the bill is printed with the words “copy money” and “in copy we trust.”

The TikTok, uploaded by user @shellymcsmelly, shows the counterfeit bill, with the user speculating that they will get fired for accepting the bill.

Apparently, this happened twice in the same evening—though @shellymcsmelly says they were able to catch these bills in time.

Counterfeit money of this nature is surprisingly easy to purchase. Numerous listings on Amazon showcase realistic-looking dollar bills, with each one marked with “copy,” “prop,” or a similar term. The stated use cases for this money range from music videos and films to pranks.

It is not illegal to own prop money. However, attempting to use it in place of real money “could be classified as a felony offense or a federal crime depending on its use,” per the Las Cruces Bulletin.

There are multiple rules that makers of prop money must follow. If they are not marked as props, they must not use the same colors or use the same paper as real bills, nor are they allowed to be the same size.

While all listed products on Amazon appear to have some indication that they are fake, many advertise “1:1 sizing.” In one example, the listing says that the money is “[1:1 Actual Size] Fake money that looks real,” stating in its specifications that it measures 6.14 inches by 2.6 inches—the exact dimensions of a real $20 bill, per the U.S. Treasury.

This has resulted in some bills like these to be fraudulently used as real currency. A CBS19 news report from Greene County, Virginia claims that police found bills like these being passed off as real currency in the county. The Las Cruces Bulletin report referenced above makes a similar claim, with the report saying that anyone who is given one of these bills should call the police.

In an email to Daily Dot, Amazon pointed to its Guidelines on Currency, Coins, Cash Equivalents, and Gift Cards. They stated that the above-mentioned 1:1 prop dollar bills meet these guidelines.

In a TikTok DM exchange with @shellymcsmelly, the user offered further insight into what happened.

“I mean, the first one…got by me and I just put it to the side,” they recalled, “but the second one I caught, so I stapled the receipt of the transaction (the guy didn’t get the stuff) and a time stamp of when it happened.”

They say they did not inform the police of the incident.

“I kinda feel weird around cops for a lot of reasons, so I didn’t call them,” they shared. “I was more comfortable with my manager going through the proper report channels cause they’re more equipped for that.”

Thankfully, @shellymcsmelly also stated in comments they were not fired for their honest mistake and noted that they will be more careful about checking $20 bills in the future.