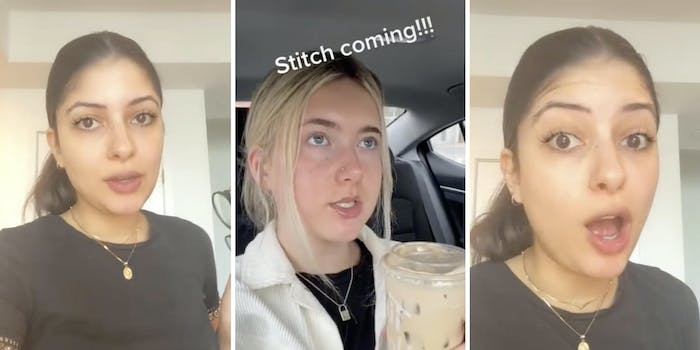 ‘Work is not your passion, it’s a paycheck’: TikToker says your job should only be tolerable, sparking debate

'Your full time job is doing things that make you happy, and this job is just there to help you pay for it.'

A viral video from TikToker @emily.the.recruiter about working to live, rather than living to work, kicked off a debate about work ethic, capitalism, and priorities.

@emily.the.recruiter #stitch with @luluhasfun I related to this video SO much. Our passion doesn’t have to be capitalism!! #careertok #careertips #9to5life ♬ original sound – Emily Durham

The creator, Emily Durham, who works as a recruiter in Toronto and shares a mixture of career advice, life updates, and skits about her dating life on her account, stitched a video from another TikToker, Lucy (@luluhasfun).

In her original video, Lucy talks about her struggle of trying to figure out a career to pursue when she couldn’t imagine a single job she’d actually enjoy doing. “How am I supposed to find something I actually want to do for the rest of my life if I don’t like any job,” she says.

Lucy’s sentiment that resonated with a lot of people.

“I just want to get paid for existing,” one viewer commented.

The conventional response to sentiments like this is to shame the speaker for their perceived lack of work ethic and dedication to capitalist goals, until they either pretend they’ve reformed and find a dream job after all, or at the very least, stay silent. While Durham herself does actually love her job as a recruiter, she had another take—one that’s increasingly popular among Millennials and Gen Z;

“You pick a job that you can tolerate, that pays the bills, and you don’t make that the center point of your life,” she says in the video.

Durham adds, “Your full time job is doing things that make you happy, and this job is just there to help you pay for it.”

In a comment under the video, she encouraged viewers to “create joy other places,” rather than at their jobs.

Like Lucy’s original video, Emily’s manifesto resonated with a lot of people.

“So glad someone said this. Work is not your passion, it’s a paycheck. You use that paycheck for travel and hobbies,” one viewer commented.

“Yes! I like my job – it pays the bills and has a pension and benefits. It’s not a passion but it lets me do the things I love and that’s okay with me,” another wrote.

However, others brought up an important point. When work takes up all of your time—40 hours a week plus transit is a lot after all—how can you avoid making it the center point of your life? Especially if, at the end of the day, you don’t have enough money left over to actually enjoy yourself because it all goes toward covering the basics.

“But the job is 40 hours a week and doesn’t leave you any time to actually do the things you like lol!” one user wrote.

“That’s so much easier said than done with 40 hour work weeks and 2 days off a week, my dreams exceed those limits,” another said.

This brought up all the usual boot-straps-style debates, with many urging these viewers to “get a better job.” Some chose to ignore material reality for a lot of people, as well as the fact that many of those low-waged jobs are essential for a functioning society.

“How about you stop being lazy and go learn a skill that pays more. It’s 2022! If you own a computer and internet, you can make money,” one viewer argued.

“Pick a job with a better paycheck. Easier said than done, but many people make awful choices in this area,” another viewer said.

Durham decided to make a follow up video, advising her followers on ways they can reclaim their lives off the clock even when work makes sure that time is minimal.

She began with a disclaimer that she won’t be tackling how “capitalism has set us up to fail” with the 40-hour work week and a recognition of her own privilege both in having a job she loves with a fair amount of down time.

Durham encouraged viewers to maintain a boundary between work and your life outside of it. She explains that when she had to work jobs that she hated in the past, she refused to even think about work when off the clock. She emphasizes the importance of that mental shift and notes that she would maximize her off-hours by going straight from work to doing something she enjoyed. Though not a solution all the time taken up by work and commuting, she says it’s allowed her to get much more out of her life away from her job, something most commenters agreed was a start.

The Daily Dot reached out to both @luluhasfun and @emily.the.recruiter for the story via TikTok comment.