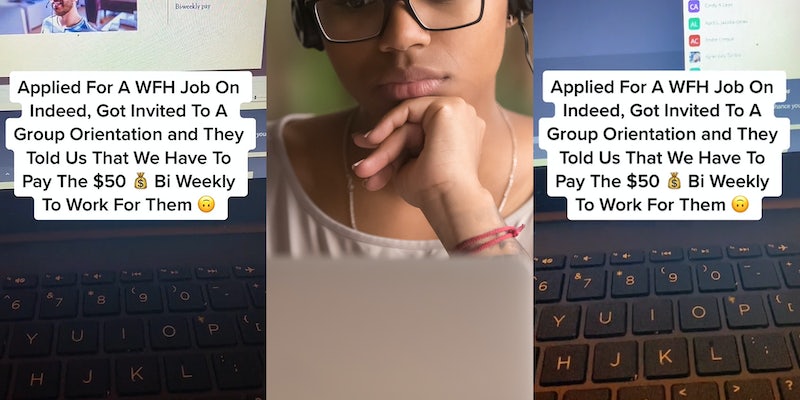 ‘I’m done applying on Indeed’: Employer tells workers at orientation that they have to pay company $50 fee to work

'They think ppl can afford to be missing that money out of they check?'

A video capturing the moment a prospective employer tells its employees that they will have to pay to work for the company has drawn hefty criticism and jokes from viewers on TikTok.

Posted by Lexus Marie (@.lexusmarie), the video shows an unnamed company providing an informational session that includes a slide stating that work-from-home agents will pay $50 biweekly to the company for employment. It is at this time that one person on the Zoom call begins laughing, before saying, “what in the cotton plantation.” Multiple people then dropped out of the call.

Viewers took note of the more amusing aspects of the situation, like the recruiter laughing after the participants began laughing.

“Was that the recruiter laughing after that person laughed?” one commenter wrote.

“Even the recruiter was laughing,” another viewer said. “They oughta be ashamed of themselves.”

“Even she giggled herself because she know it sounds ridiculous,” a third added.

Some viewers shared that they had been through something similar and advised others to steer clear of it.

“I went to an interview like this where I had to pay $95 to get trained,” one commenter wrote.

“Got all my jobs (from) Indeed,” a second shared. “A lot of (work from home) jobs are scams if it’s something like call centers.”

“I got a similar invite on LinkedIn and glad I didn’t go,” a third stated. “I felt like it (definitely) was a scam.”

The Daily Dot reached out to Lexus Marie via a comment on the video, as other methods of contact could not be identified.