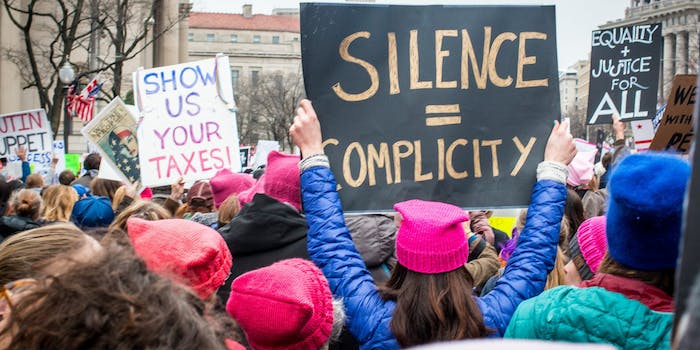 The Women’s March is set for January 2019, but will that be too late?

It's time to rethink the Women's March.

As 2018 enters its home stretch, the Women’s March has revealed its next national protest. The Women’s March is coming Jan. 19, 2019. And it might be two months too late.

The Women’s March unveiled the date on Saturday and shared a website for the 2019 march, stressing that women are “outraged,” “organized,” and ready to “march again.” This time around, the Women’s March is using the #WomensWave hashtag in order to promote the event. The hashtag references the “women’s wave” expected for the 2018 midterm elections, where, like the Democratic “blue wave,” political analysts expect Democratic voters to bring dozens of women into office amid ongoing controversy about women’s treatment by the Trump administration and its allies.

Today and tomorrow, we are joining @BlackWomensBP for the #MarchForBlackWomen. We hope you are too!

One of the biggest election cycles of President Donald Trump’s administration is just a few months away, and women see the 2018 midterms as a referendum vote against the president. So why is the Women’s March waiting until January for its next national protest? Twitter users quickly pointed out that the women’s wave will either be a success or a failure by then, and with the midterms still on the way, mobilizing voters now should be a greater priority than choosing a date that falls in line with last year’s march.

So after the election? pic.twitter.com/pCnyEktcvT

That’s a weird date. Why not before the election?

I agree we need a march sooner… prior to the midterms!

This is awesome but there also should be a march prior to the November 6th mid term elections!#womansmarch #Midterms2018

When will we be marching to protest Kavanaugh’s confirmation. Time is of the essence. We need to do this now. I beg you

Why so late? We need this the Sunday before the November Election, not AFTER it!

It’s easy to understand why the Women’s March chose January 2019 for its next national protest. For one, organizing takes time, energy, and a lot of preparation. Protesters are much more likely to come out for a regular annual event that happens once every January than a spontaneous pre-election protest, too. The Women’s March is probably banking on the fact that the women’s wave will be a success, so instead of protesting in November, the march wants to use that post-win high to encourage women to stay politically active as 2020 pushes forward.

On paper, all those ideas make sense. But they aren’t necessarily what women need right now. It’s Oct. 1, and women are hurting over Brett Kavanaugh’s nomination and Dr. Ford’s testimony. Women feel retraumatized again and again by the news cycle, and they need female politicians who understand them and fight for them. Yes, women are outraged, organized, and ready to march, but most women feel like they’re sitting on their hands and waiting for a moment to cry out and act. For many women, the difference between abortion remaining legal and being outlawed is Nov. 6, 2018, and that means January is too far away. We need to march right here, right now.

sksks they're trying to address the backlash they've been getting from black women https://t.co/YrMV6mDH3J

The time for another Women's March is not in January, it's BEFORE the midterm elections. Do it now.

I firmly believe another women’s March needs to happen before midterms if they push this lying POS through. #DelayTheVote

The Women’s March’s date plays into a common theme that’s plagued the march for years: Its organizers aren’t always attuned to women’s needs. On the one hand, there are the march’s pussyhats, which became a de facto symbol for the march after the protest’s enormous success in 2017. For many cisgender women, the hats were a way to express pride over their bodies and to express their support for abortion. But the pussyhat left many trans women and trans men feeling alienated, as the hat implies that women are unified through their genitals, not their shared experiences as women.

The Women’s March’s local leaders have since distanced themselves from pussyhats, but its stain has lingered on as a microcosm for how the march leaves out some women to benefit others. When the Women’s March praised Barbara Bush amid her passing, many were quick to point out that Bush openly criticized Anita Hill after she alleged Clarence Thomas sexually harassed her. Then there’s the Women’s March’s co-chair Tamika Mallory, who attended an event hosted by the Nation of Islam’s Louis Farrakhan. During the event, Farrakhan alleged that the Jewish people are turning Americans gay and transgender, Vox reports. Malloy previously called Farrakhan “the GOAT,” or greatest of all time, on her Instagram page.

Mallory’s attendance proved extremely controversial for myriad reasons. For one, the Nation of Islam has played an important role in supporting some of the most socioeconomically marginalized Black Americans in the U.S., and that contribution is often erased when white journalists comment on Farrakhan or the Nation of Islam’s role in supporting incarcerated Black men or impoverished Black families. Yet Farrakhan’s statements still reinforce homophobic, anti-Semitic, and transphobic violence, all three of which affect women throughout socioeconomic classes and races. While Mallory has since stressed that she’s constantly listening and ready to learn, the incident left many Jewish and queer women feeling isolated, hurt, and confused, and that hurt hasn’t gone away. After all, next year’s march falls on the Sabbath, which suggests the Women’s March isn’t ready to accommodate Jewish women quite yet.

With the Women’s March slotted for January 2019, it begs the question whether the group’s organizers actually understand what’s best for the women’s wave. As many women as possible need to come out to vote, and that means prioritizing a march around helping the most marginalized women get to the polls. Yes, it might be a little bit more inconvenient to march in late October or early November. But if that means more women of color, trans women, queer women, and impoverished women cast their vote to make the women’s wave become a reality, then it’s a win for women across the U.S.—not just the ones still wearing pussyhats.