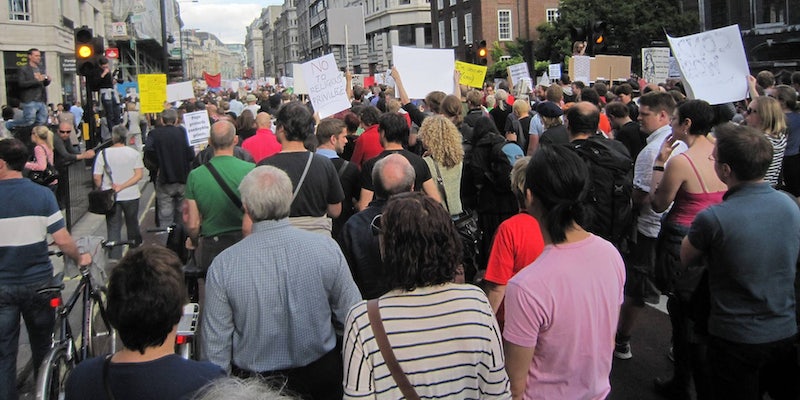 Why I’m walking out of work today

I'm protesting the many inequalities of this country.

When I woke up the morning of Nov. 9, like many women and people often pushed to the margins, I was crushed. Not casual-bummer crushed, but heart-sunk, scrape-me-off-the-floor, head-spinning-from-processing-every-last-detail-that-could-have-led-us-to-this-point type of crushed. While my male journalism colleagues began to strategize how we will tackle Trump’s surprise win, I wanted to surrender to the hollow weight that flooded my body. I wanted to fold unto myself and let out deep, guttural sobs, because what I had known all along but hoped wasn’t true had been confirmed: We are, at best, a country that cares very little to understand each other. At worst, we are one that will do everything in its power to ensure people like me are never afforded equality.

In those first few days after the election, there was the anxiety, fear, and dread over how and if we will able to protect Muslims, immigrants, people of color, the LGBTQ community, and many more in Trump’s America. And then there was the depression—that reminder in the form of the most powerful man in the world that there is a hierarchy of people’s needs and that hierarchy has never changed in America’s long, violent history. Even though I have spent much of my life and career aware of the very sexism and racism that undermines our nation, I still thought it was ready to elect, by every measurable standard, a more qualified president, a woman president. If anything, I thought it wouldn’t elect a man who was accused of sexually assaulting or harassing over a dozen women. And I was so wrong.

In the month since the election, I have done what many who feel helpless have done and then still felt helpless afterward: I have given money to the ACLU, SPLC, Planned Parenthood, and Standing Rock. I have called my senators and told them I don’t want our nation advised by a white nationalist. I have had long and hard conversations with close Trump-voting relatives. I have shown up to work every day and reported and edited and published stories of people already hurt by living in an America that thinks swastikas are cool again. But this is the last story I will publish today.

If nothing else, the election has shown us that we can’t expect people’s minds to change and progress to happen because time has moved forward.

Staff writer Jaya Saxena and I are off to the Women and Allies Strikeout and Protest. There are many reasons to protest—all the reasons I stated above, for starters. And then there are others that were the subtext of this very election: the gender pay gap; a woman’s right to make decisions over her own body; a culture that protects and rewards sexual abusers; every single standard to which women are held that differs from men; the discriminatory policies and historical prejudices keeping the poor and marginalized from the same opportunities as the rich, white, and male.

I know that going to one protest won’t change the status of who our president is or with whom he’ll fill his cabinet, but protests make people take notice. In France, women followed the lead of their counterparts in Iceland and walked out of their jobs in early November, with 15 percent of the year left to go, to protest the 15 percent gender pay gap in the country. In Poland, when 6 million people marched in the streets in October to protest a law that would basically ban abortion, lawmakers caved and threw out the legislation—one official even admitted the protest “caused us to think and taught us humility.”

If nothing else, the election has shown us that we can’t expect people’s minds to change and progress to happen because time has moved forward. We have to try every single thing we have the physical and emotional space for to show we won’t stand to be treated as third- or fourth-class citizens in our own country. As Chimamanda Ngozi Adichie so aptly put in the New Yorker recently: “Now is the time to resist the slightest extension in the boundaries of what is right and just. Now is the time to speak up and to wear as a badge of honor the opprobrium of bigots. Now is the time to confront the weak core at the heart of America’s addiction to optimism; it allows too little room for resilience, and too much for fragility.”

Now isn’t the time to surrender.