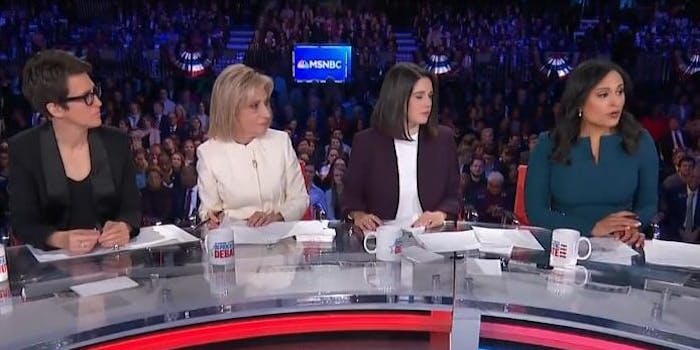 It's the third time in history.

Tonight was the first debate in this presidential election, and only the third in history, to feature an all-female panel of moderators.

In spite of women comprising a shade more than 50% of the United States’ population, and having voting rights nationwide for a century, females have been largely trapped beneath the glass ceiling in national politics until recent years.

Much like the four female candidates onstage, tonight NBC News’ Rachel Maddow, Andrea Mitchell, and Kristen Welker, and Ashley Parker from the Washington Post were literally breaking through that ceiling in real-time.

“Elect more women,” Christina Reynolds of EMILY’s List tweeted. “Have more women as moderators. Make sure more women are at the table…wherever the table is.”

“Well it took four women moderators to make it happen – but on the FIFTH Democratic debate we are FINALLY hearing questions about women-related issues,” activist Amy Siskind said, nodding to complaints that previous debates didn’t delve nearly enough into abortion, maternity leave, and other issues that are of particular importance to women.

It’s the first time in history that women are the majority of the debate stage!

These four moderators for every debate, please.

4 women moderators. Maybe someone could ask about why US is so terrible at maternal health?

We’re so glad the moderators asked about paid family leave, an issue that affects all parents. “There are only two countries in the world that don’t have paid family leave….I would pass paid family leave as one of the first things I do.” Thanks @andrewyang for prioritizing this. pic.twitter.com/KlN1JR0Z5H

Seeing only women shouldn’t be so radical, but it is. I smile every time the camera goes to the moderators. https://t.co/fUf2Wwjxyw

An interesting effect of having more women moderating the debate, as Vox editor Kay Steiger pointed out, is that the four women on stage were also getting more speaking time than in previous debates.