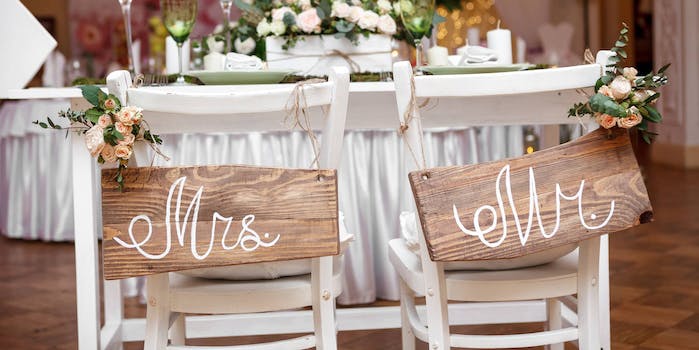 Women who keep their maiden names are seen as less ‘committed’

It's a choice—and, apparently, it's still a loaded one.

A new study of college students reveals that, despite many feminist ideas becoming more mainstream, we’re still punishing women for not changing their name for heterosexual marriage. The study, which questioned far more women than men, showed undergraduate students think women who don’t change their names weren’t as committed to their spouses.

Other studies have confirmed these findings. Though the percentage of women keeping their last names (or the couple taking a new or hyphenated name) has been rising, with people saying women should be able to choose whatever name they want, apparently both options still aren’t seen as equal. But why?

The issue of women changing their last names intersects with race, class, and culture. In China, women keep their birth last names because it ties them to their father’s lineage. Same-sex marriages between women mean there is no man’s name to take. And as there is no law in America requiring women to change their names upon marriage, both women and men are free to change their names whenever they want for whatever reason. But studies like these reveal that a woman changing her name, while a choice, is still the easier (if you don’t include all the legal paperwork involved), expected choice to make.

There are many reasons a woman would want to change her name. Common ones are that she feels no connection to her father’s side of the family, she wants her and her spouse to share a name, she sees it as a vestige of a time when women were treated as a man’s property rather than partner, or she flat out doesn’t like the one she was given at birth. These are all solid reasons.

However, you’ll rarely see men giving, or asked to give, name-changing the same consideration. Men who hate their fathers would not consider taking their wives’ last names the way women would their husbands’. Men who want their family unit to have a united name would rarely be asked to give their children their wife’s last name. It’s just not something men are raised to think of as an option.

Conversely, women who keep their “maiden” names are asked to provide endless reasoning as to why they would. The assumption is that they have established a career under their name, or that they don’t like their spouse’s name. Some women keep their names for these reasons, but for many others (including yours truly), the “choice” to keep their name was not some deep consideration—it’s just what they did. They identify with their name, so why change? And yet, for women, it’s still a choice to be justified one way or the other. For men, it’s a given.

In an interview with PsyPost, the study’s corresponding author Rachael Robnett said that while this reaction appeared across the board, the prejudice against women who kept their names was felt more strongly in “people high in social dominance orientation,” who reacted “negatively to violations of the existing social order that affords white, heterosexual men with status and power; they tend to be high in sexism, racism, and other forms of bias.” In other words, those who responded negatively to women keeping their names were invested, consciously or unconsciously, in upholding white male supremacy.