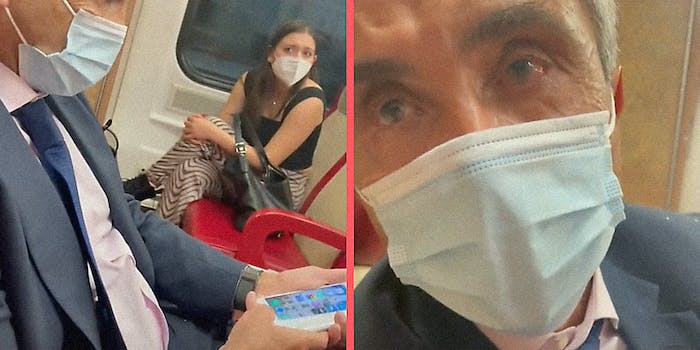 'I hope you don’t have a wife and kids.'

A TikToker is looking to the internet for help in identifying a man who was allegedly taking pictures up her friend’s dress while they were on a train.

Meagan Price (@meaganprice63) was sitting next to a man in a suit when she realized he was allegedly looking at pictures and video he had taken of her friend, who was sitting across from him at the time, including ones angled to look underneath her dress.

She turned on her camera and confronted the man, who initially denied taking any recordings. His tune changed as both she and her friend persisted, and he became very apologetic.

The friend demanded the man show them his photos and delete them as Meagan continued to record.

“I hope you’re embarrassed right now, and I hope you don’t have a wife and kids,” the friend told him, as he continually apologized.

The man ultimately thanked them as Meagan’s friend deleted all the photos from his phone, to which she replied that he’s “disgusting.”

The women waved over an employee, told him what happened, and asked for the man to be moved elsewhere. The employee asked if he should call the police, and they agreed that would be the best course of action.

“I will never understand why men feel so comfortable doing this? What is wrong with him,” wrote @abnicb. “I’m so sorry you experienced this type of grotesque behavior.”

“He doesn’t even seem like he thought he did anything wrong,” @savvypppppp pointed out.

According to @TizzyEnt, who shared the video to his Twitter page to try to track down the man’s identity, the incident took place on a train ride that originated in New York but may have ended in Connecticut.

Upskirt photos taken in public are reportedly still of questionable legality in the majority of the United States, although they constitute a felony in New York. Connecticut reportedly added a specific bill against upskirting in 2019 to close a loophole in their existing anti-voyeurism laws.

The Daily Dot has reached out to @meaganprice63 via TikTok message.