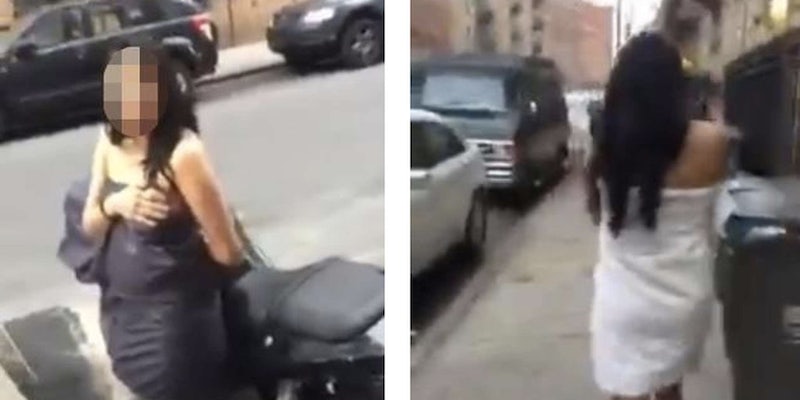 The video went viral. Now justice will be served.

This post contains a description of violence which may be disturbing to some readers.

A video has gone viral this week depicting a young woman walking down a New York City street wearing only a towel and boots while being filmed from behind by a man who is yelling at her. Eventually, he takes her towel and she is forced to continue walking in the nude as he calls her a “bitch” and a “whore.”

The video was posted earlier in the week on LiveLeak and the description read “The young man came home to find his wife having multiple conversations with different men and sharing naked pictures. He made her walk naked in the New York Street.” It was also posted on YouTube, but was eventually taken down for “violating YouTube’s policy on spam, deceptive practices, and scams.”

While the scene is disturbing enough on its own, the NYPD said that the worst occurred before filming started.

Jasson Melo, 22, is the man behind the video, the NYPD Office of the Deputy Commissioner, Public Information, confirmed to the Daily Dot. He turned himself into authorities on Wednesday, admitting that he assaulted his girlfriend, also 22, at approximately 5am on Sunday in their Harlem apartment and then forced her outside to film the horrifying video.

Melo is being charged with criminal obstruction of breathing, endangering the welfare of a child (as his girlfriend’s three-year-old daughter was present), coercion, and assault.

The video went so viral that Chirlane McCray, First Lady of New York City, has released a statement addressing it on behalf of the Commission on Gender Equity. In the statement, provided to the Daily Dot by the Mayor’s Office to Combat Domestic Violence, she writes:

“Earlier this week a video emerged that depicted intimate partner violence on a sidewalk in our city. The video displayed verbal abuse, forced humiliation, and harassment by the alleged offender, directed at his wife [sic]. Posting that video online perpetuated the abuse, which New York City does not tolerate. We are steadfast in our efforts to make sure all victims of abuse are aware of the many resources available as we strive to make New York City’s public and private spaces safe for all women and girls.”

The Manhattan District Attorney’s Office declined to comment at this time about when the suspect will be arraigned.

Update 5:03pm CT, Jan. 21: The Daily News has come across Melo’s Instagram. He posted a series of videos in the past two days, explaining why he did what he did and providing some some insight into his state of mind.

The videos are all in Spanish, and the earlier clips show him mocking the outrage over how he treated his girlfriend. He also shared comments from others showing support for his actions. But later, he takes a turn toward forgiveness.

“Jason Melo here. I want to ask all women for forgiveness. I want them to know, that really, I didn’t want this to—I didn’t think this would—get to this point,” he says in one video.

In his second to last video, he says “I came from a woman, I have a daughter, and I have two sisters. But look what you pushed me to do. I am sorry for everything. This the last video I will make, I don’t want any interviews, I don’t want anything.”