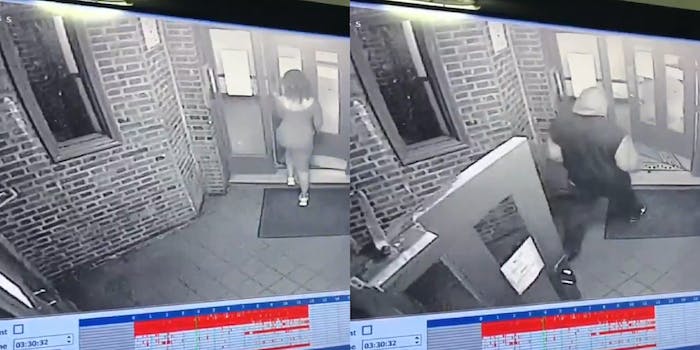 ‘As women we always worry about falling victim to situations like these.’

In a now-viral Twitter thread, a woman shared a terrifying story of someone allegedly trying to follow her into her apartment building, along with surveillance videos to show how real and scary these situations can be.

Alexa, a 30-year-old Bronx resident, said she was dropped off at her apartment building by an Uber driver at 3:50am on Saturday. “I’ll also take this opportunity to reiterate the importance of drivers waiting for their passengers to arrive at their front door safely before driving off,” she wrote on Twitter. “In this case, mine didn’t.”

The following footage is me walking up into my building. You’ll notice a man walk behind me moments later. I did not see or hear him. pic.twitter.com/oxCtNvcstN

Alexa said she didn’t see the man following her, but when she got into her apartment building lobby, she felt as if “something was warning me to be cautious or that I wasn’t alone.” Using the mirrors in the lobby, Alexa said she saw a reflection of something outside the front door. “It looked like a shadow,” she wrote. “I approach to see who/what it is and as I get closer I realize I couldn’t see a face.”

She said she quickly made sure the door was locked and saw a man with his face covered on the other side. In her thread, she shared surveillance video of this, from both the lobby where she was and the front door where the man was.

This video is the recording of me entering my building with my keys, & the man coming behind. Note that this video is happening in parallel to the one from inside my lobby. He most likely doesn’t follow me inside because he intended to attack me before I entrd my building…. pic.twitter.com/dDocMQ4YSU

After Alexa left and started to go up the stairs, she said he tried to push on the door again to get in, seeming to confirm Alexa’s suspicion that he was waiting to follow her into her actual apartment. She also believes that she was targeted because she was a woman. “Viewing footage the following day, I learned there were men coming in and out my building all night, even minutes before I got home,” she wrote. “None were followed, confirming he was scouting a woman.”

Alexa says she shared the surveillance videos with her story to get people’s attention about how serious and scary this really is. “Showing the footage makes it more ‘real’ than saying ‘this happened to me.’ You can’t deny what’s going on in that video,” she told Buzzfeed As/Is. Alexa also shared the man’s description to warn other Bronx-area women.

He was about 6’3, around 220 lbs, wearing a black jacket w/dark grey sleeves & hoodie & dark grey jeans. He wore a scarf up until just under his eyes so I couldn’t see his face. If you have any information, contact your authorities, or me. If not, RT this thread to save a life.

“Since Saturday night I keep replaying the incident over and over, thinking of the many factors that could’ve caused a different outcome,” Alexa wrote. “As women we always worry about falling victim to situations like these, but I let my guard down because I was home. I just thank God and his angels, my angel, for being with me that night.”