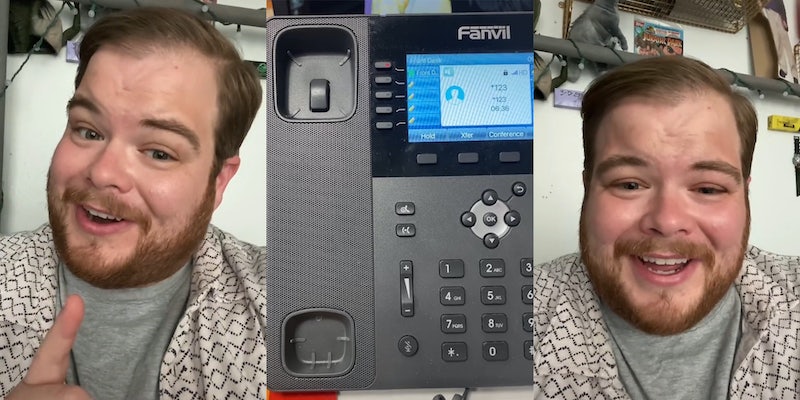 ‘She called us like we were gay animal control’: Woman ‘reports’ gay person in voicemail to queer resource center

'Okay but i’m a lesbian and this service would be useful.'

A worker at a queer resource center says that an older woman left a voicemail asking them to “help” her with a gay person who was “bothering” her, sharing the recording in a now-viral TikTok.

In the video posted by TikToker Jackson Carter (@jacksonwhitt) on Aug. 15, he says that the queer resource center he works for gets “a lot of crazy calls,” but this voicemail was his “favorite.”

“I’m having problems with a… gay person that I’ve known for a while, and he is bothering me,” the woman says in the voicemail. “I would like to report him to you. I know that you could help me so that he will not bother me any longer.”

Carter then records his reaction to the message.

“She called us like we were gay animal control to come remove the bothersome homosexual from her neighborhood,” Carter jokes in the clip. He also says that he thought he heard the woman “almost drop a slur.”

The caption reads, “In her defense, I’m usually having problems with a gay person too.” Carter’s video reached over 767,000 views in less than 24 hours. In the comments, users cracked jokes about the situation.

“Okay but i’m a lesbian and this service would be useful,” one user said.

“She is living in 3022 honestly. Tempted to make this call myself on more than a few of us,” another wrote.

In a follow-up video, Carter says the woman called him back but that he didn’t record the second call, warning that it “sounds made up.”

“She tells me that this gay guy has lived across the street from her for years, he’s ‘evil,’ he’s ‘wicked,’ and he has been harassing her but she can’t prove it,” Carter claims. “He has energy machines in his house that shoot electrical pulses through his window into her window to harm her.”

Carter continues to explain that the woman alleged she felt two beams hit her “straight in the chest.” The TikToker responded saying she should contact the authorities. He says that she laughed it off and said that instead, she had contacted two “Mormon leadership” members and her gay neighbor’s pastor, Pastor Jimi, to report the situation.

“She says Pastor Jimi knows all about these energy machines and that I should talk to Pastor Jimi. And at this point, I’m invested, so I find Pastor Jimi,” Carter says. “And I, a grown man, sent another grown man this email. You know, obviously, I have to tell him about the lasers.”

In the email, Carter explains the situation to Pastor Jimi and asks if he has spoken to her as she claims, suggesting that they reach out to the authorities for a “wellness check.”

Many commenters commend Carter for reaching out and suggesting a wellness check. Others explained that the woman might be experiencing a “common” delusion, sharing their own experiences getting calls from people suffering from conditions like dementia.

“Therapist here: Unfortunately this is how persecutory delusions can take shape in the postmodern age due to advances in tech,” one user explained.

“I work for a Govt agency and answered phones for a publicly available phone #. The lasers coming from neighbors is a common delusion,” another said.

The Daily Dot reached out to Carter via email.