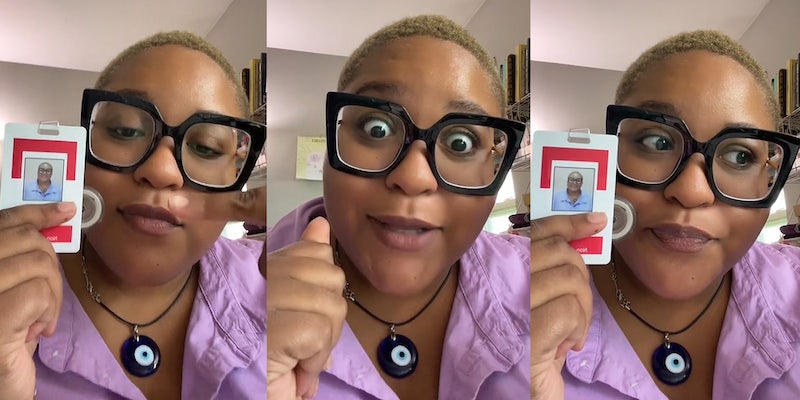 ‘What they had me doing was not worth no $17.86’: Worker says she started a new job…and decided to quit on the same day

'And they wonder what’s driving the great resignation.'

A woman on TikTok says she decided to quit her job the same day she started because her expectations didn’t match her new employers’.

User Lysha (@lysha_lysha0722) posted a six-second TikTok on Tuesday revealing her new employment status. In the video, she shows her employee badge, saying, “I started a new job today… and I’m quitting.”

As of Wednesday, the video went semi-viral with about 16,000 views and viewers asking Lysha for a story time. On Wednesday afternoon, she obliged and posted another video explaining her resignation.

In the update, Lysha explains that she got hired through a staffing company to work for an insurance company. She told the staffing company she wanted to work remotely rather than in an office, but they matched her with a job that’s a hybrid role. The role required that Lysha works at the company’s office two days out of the week and at home for the other three days, she says.

“That’s not exactly what I wanted, but I was like, fuck it, I’m not going to be picky,” Lysha says in her video.

She says she decided to take the job, thinking it would take two or three weeks of being in the office before she could work from home. When she started, the company told her she wouldn’t be able to work from home for three months. She says that schedule was “automatically not going to work” for her.

The job would have paid her $17.86, which was “eh” but sufficient for Lysha because she lives in Ohio, she says. But the tasks she was required to perform merited higher pay than $17.86. She says she should have been paid “easily” $24 per hour.

On her first day, Lysha says she didn’t receive any training whatsoever. She says she was immediately set to work with data entry. Another “red flag” was that the staff had a meeting, and Lysha heard managers saying that since the company was hiring more temps like her, they would be able to give regular staffers more paid time off.

“So this means that they literally brought us on for us to do all of this fucking work for them real quick,” Lysha says. “Mind you, the work is hard as fuck.”

She says that although she wanted to quit when she posted her first TikTok about the job, she decided to go back to the job the next day. When she arrived at the office, another employee skipped saying “good morning” or “how are you” and instead shouted in surprise, “Wow! You came back?”

Five people, including her manager, told Lysha how surprised they were that she came back, she says. By her lunch break, she “was out,” quitting on the spot.

In the comments section, viewers supported Lysha for leaving the toxic environment.

“And they wonder what’s driving the great resignation,” one viewer wrote.