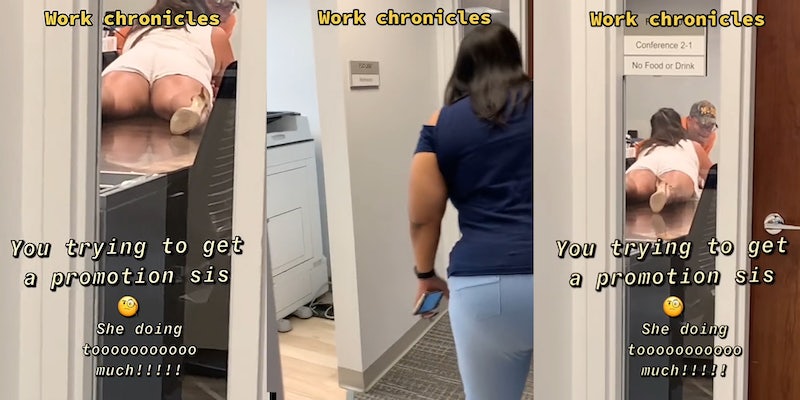 ‘Sis working for that promotion’: Woman lies on top of co-worker’s desk in office, sparking speculation

'Sis trying to jump straight to co-owner of the business.'

In a now-viral TikTok, a worker shows her co-worker laying on top of another co-worker’s desk on her stomach in a conference room. The video has sparked speculation that the woman was “trying to get a promotion.”

In the video posted by TikToker CC (@vonashay1) on Oct. 3, she records herself and another co-worker peering into a conference room, where another worker is laying on a desk in front of a male co-worker. The text overlay reads, “Work Chronicles. You trying to get a promotion sis. She doing tooooooooooo much!”

“What kind of meeting is that?” one worker exclaims in the clip. “I’m trying to get in on that meeting. Like who does meetings like this? She trying to get a promotion.”

The video has amassed over 373,000 views as of Tuesday, with commenters joining in on the speculation.

“No! No! No! Sis trying to jump straight to co-owner of the business because it ain’t no way,” a commenter joked.

“She will be his personal secretary or wife by the end of the year,” another wrote.

Others suggested that they “report” the incident to HR.

“I would send that straight to hr bet she won’t be doing that again,” one user wrote.

“As an HR Professional this is definitely going to come up in a few months,” another said.

“Pics would be sent straight to HR,” a third added.

The Daily Dot reached out to CC via email.