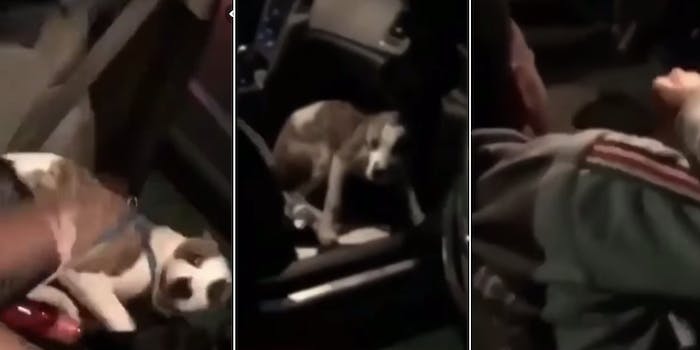 She claims the dog attacked her son first.

A Houston woman says she received death threats after a recent video of her kicking and punching a cowering, yelping dog went viral.

The video prompted a wave of vitriol from viewers after California-based nonprofit the Kris Kelly Foundation shared it on Facebook. Following the clip’s rise to viral status, the woman seen in the video—identified as “Meshia (Jaymeshia) Vigne” in the Facebook post—spoke out, telling Click2Houston that the dog attacked her 5-year-old son moments before the video began.

The 40-second video shared by the Kris Kelly Foundation begins after the dog allegedly attacked Vigne’s son. It can be difficult to watch the small dog as it yelps and cowers from Vigne and her companions, who rain blows upon it. Laughter can be heard in the background.

The dog makes several attempts to hide beneath the seats of the vehicle in which the video is filmed. At one point, someone can be seen reaching to pull the dog out of the car. They are quickly replaced by a young man who begins kicking the crying canine again.

Vigne told Click2Houston that prior to the start of the video, her crying son approached her, followed by the strange dog.

“He fell,” Vigne told the publication. “When he fell, the dog jumped on top of him.”

According to Vigne, the dog scratched her son behind the ear when it attacked. She claimed to not know the origin of the video, nor any of the people heard laughing in the background.

“That’s nothing to brag about, fighting a dog,” Vigne added.

The Kris Kelly Foundation—which aims to “save animals from abuse, slaughter, and neglect,” according to its website—shared the video to Facebook on Oct. 10, along with Vigne’s name, Facebook page, and an incorrect physical address. It also provided contact information for Houston Child Protective Services and the Houston Police.

The video gained traction over the next several days, and it has since received hundreds of reactions and thousands of comments. Strangers soon began reaching out to Vigne and her family, with many of them threatening violence, according to Click2Houston.

Many people expressed their disgust with the behavior in the original post’s comment section. Following several supposed kidnapping threats, Vigne decided to keep her son home from school and reached out to the police.

“I made a police report, I spoke to the detectives, and I showed them the pictures,” she said.

The Animal Cruelty Unit of the Houston Police is investigating the incident. According to Vigne, an officer informed her that she likely won’t face charges. A spokesperson declined to discuss potential charges with Click2Houston.

Vigne and the Houston Police Department did not immediately respond to the Daily Dot’s request for comment.