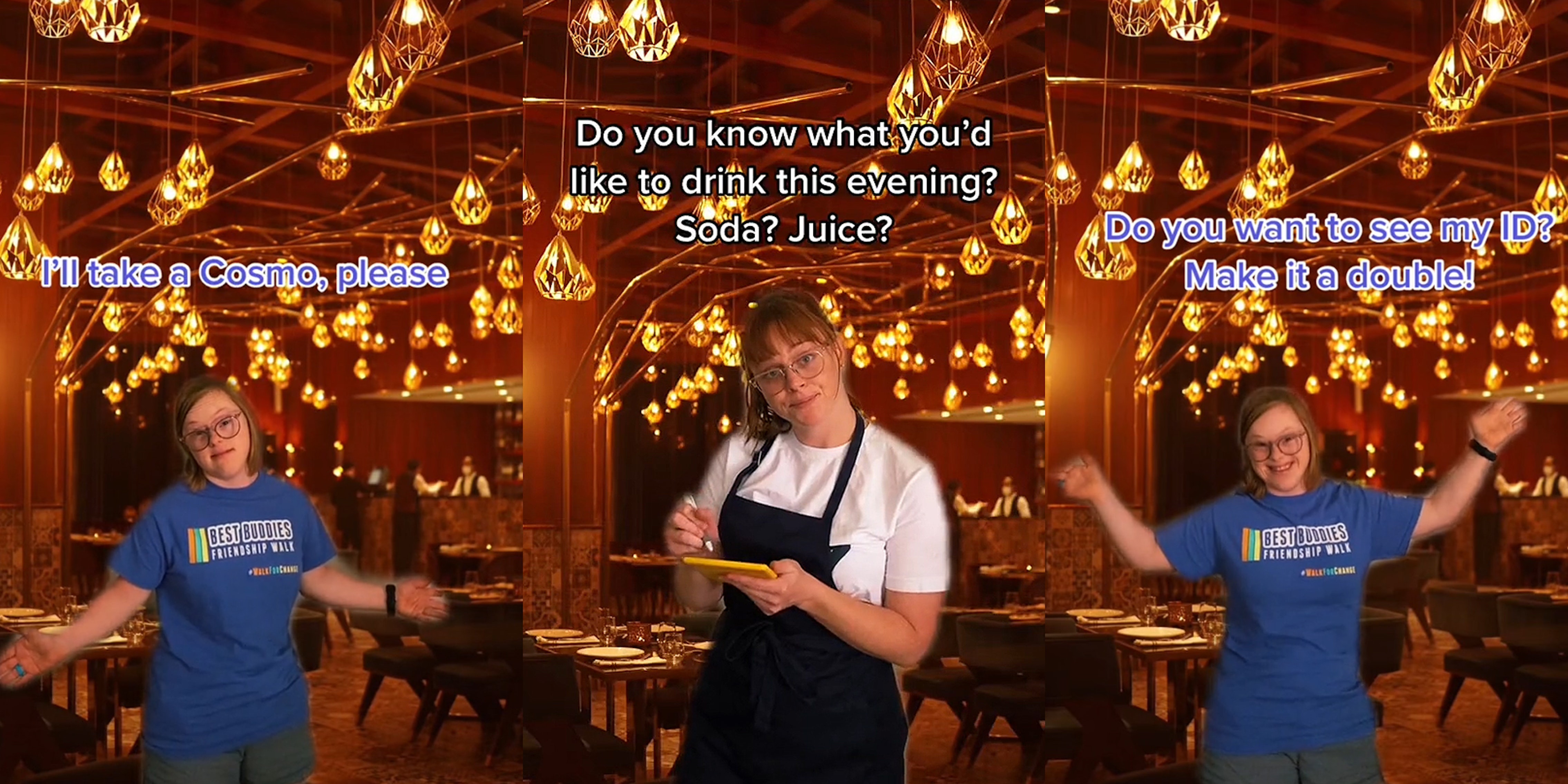 ‘Just ID me like you do everyone else’: Woman with disabilities says she’s infantilized whenever she orders alcohol at restaurants

TikTok user Claire Toman (@clairetoman) posted a viral clip that sparked a viral discussion regarding inclusion at restaurants when it comes to serving adults with disabilities alcohol.

Claire has stated in other TikToks that she has Down Syndrome, and has advocated for inclusive initiatives because they’ve made such a positive impact in her life: like the fact that in 2021 she became the first person with DS to graduate from Florida State University.

And while there has been significant legislative progress with regard to anti-discrimination against individuals with disabilities in education and the workplace, Claire says that there are other areas in life where she still sees that there’s a double standard, like when she wants to order a “grown-up beverage” at a restaurant.

In a 10-second video that shows a sketch of a server waiting to take her order over a green screen of a restaurant backdrop, Claire depicts how staff will often assume she wants to drink “soda” or a “juice” because she has Down Syndrome. In another TikTok, Claire shared that she was 25 years old.

@clairetoman Don’t question me, just ID me like you do everyone else! #inclusion #greenscreen #over21 #downsyndrome #downsyndromerocks #clairetoman #championoftheyear #MadeWithKeurigContest ♬ Sensual Seduction – Snoop Dogg

In the video, a series of text overlays read as follows:

“Do you know what you’d like to drink this evening? Soda? Juice?”

The camera then cuts to Claire, “I’ll take a Cosmo, please.”

“Do you want to see my ID? Make it a double!” she replies.

According to Intellectual Disability, a 1999 UK survey reported that 28% of carers/parents of those with Down Syndrome remarked they experienced discrimination as a result of the condition. Children’s Hospital defines DS as “the most common genetic cause of intellectual disability.” While the UK analysis, as of this writing is some 23-plus years old, it doesn’t seem that attitudes towards DS, which occurs in 1 out of every 700 human births according to the CDC, have changed much since then.

A 2017 Stand to Reason piece cited that 67% of Americans elect to abort children that they know will be born with Down Syndrome. However, there have been changes in public perception towards rights for individuals who have DS: Global Down Syndrome penned that “more than 75% of Americans” believe that folks with DS should have the right to manage their own finances, vote, own a home, and enjoy the same freedoms and independence, without a guardian overseeing or micromanaging aspects of their lives that folks who aren’t classified as having a disability enjoy.

Parents have also remarked that they’ve felt “pressure[d]” to terminate their pregnancies when they discovered, through genetic testing, that their child will have down syndrome. So while there do seem to be more programs that focus on inclusion that have proven successful, like in Claire’s case, attitudes towards individuals born with Down Syndrome still seem to be a controversial topic.

TikTokers who saw Claire’s viral post expressed sympathy with the FSU grad, and others with disabilities also expressed that they’ve had similar experiences when going out and ordering alcoholic drinks.

“My disability makes me look younger too and people think I’m younger than my little brother when I’m an adult,” a user wrote.

“Ugh yes this, I just had someone give me so much attitude at the bar for what? Their inability to guess my age right?” another shared.

“How this happened to a friend – the waitress asked her if she wanted a milk,” one user said.

The Daily Dot has reached out to Claire for further information via TikTok comment.