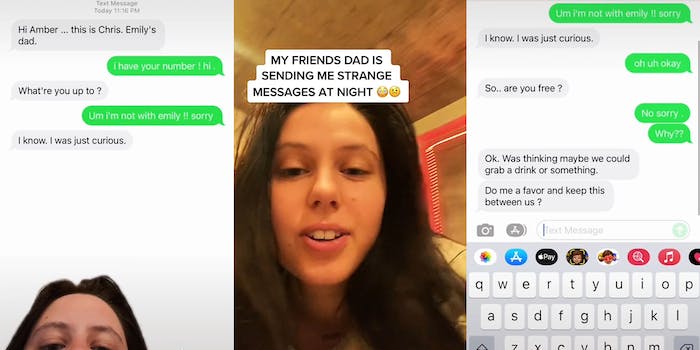 ‘Is that not a little weird?’: A woman got a text from her friend’s father asking to get drinks. TikTokers want her to tell her friend

'The wedding ring tho.'

Navigating romantic relationships can be difficult, especially if you’re trying to gauge someone’s interest. Plenty of modern dating applications try and remove the stress of that initial ice breaker: you swipe on someone’s picture or profile so you know there’s at least some modicum of interest and then it’s up to whoever’s talking to either put their foot in their mouth or move the conversation forward to actually meeting up in person.

While there are plenty of reports that have highlighted the adverse effects on mental health that perpetual use of online dating apps has had on people, it can also be pretty darn awkward whenever you get hit on by a family friend, especially when it’s from a person you would’ve never considered dating, like your best friend’s dad.

According to her TikTok video, this is exactly what happened to Amber Pozzi (@amberpozzii).

She uploaded a video with the caption, “I’m really really scared,” and tells the story of how she received a text from her friend’s father during odd hours of the night.

Text overlay reads: “My friend’s dad is sending me strange messages at night,” as Amber shakes her head saying, “No, nope, I’m turning the light on for this,” as she sits up in bed.

She continues, “It’s literally almost midnight. Just look at the text I just received from my friend’s dad. She stresses, “he must be 58, no judging.”

She then proceeds to show a text interaction between her and the man, which starts off innocently enough. Pozzi proceeds to let the man know she’s not with his daughter, and he says he knows and was “curious” what she was up to and if she was free to get drinks, and if she could “keep this between us.”

She goes on to say, “Is that not like a little weird at this time of night? In general!” She then muses, “I should probably text back. Should I? I can’t, I can’t. He just asked if I was free. Why, why does this happen to me?”

Amber then decides to make an executive decision and stop texting her friend’s father. She says, “I’m cutting it there I’m not responding. Like….what did he want me to say to that?”

The video then progresses with Amber receiving yet another message from her friend’s father: a selfie of the man wearing a blue, thin-strapped tank top. It appears like he’s wearing a wedding ring in the photo, too.

Her response to the photo? Crying.

One commenter didn’t believe it could be real, saying, “She is pranking you.”

Others were just grossed out at the prospect of the man messaging her for drinks and urged her to inform her friend of what happened.

“NOOOO please tell me you told your friend,” said one TikToker.

A third commenter urged, “Nooooo girl. Tell your friend! As soon as a man says “keep it between us” do the opposite!”

Other women in the comments section remarked that they too had similarly uncomfortable situations with their friend’s fathers.

One user said, “girl. my bestfriends dad did this to me. he would ask me to come over when she wasn’t home. it was very traumatizing. i hated going to her house.”

The Daily Dot has reached out to Amber on TikTok for further comment.