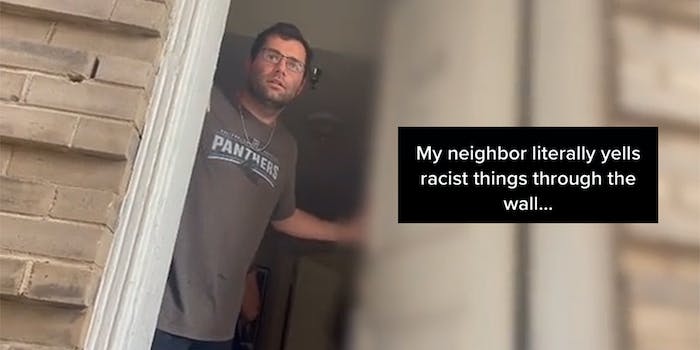 ‘Every time you say the racist things, I can hear you‘: Woman confronts neighbor after hearing him through wall

A Black woman filmed herself confronting her neighbor for allegedly “saying racist things.” She said she overheard him through the wall.

“My neighbor literally yells racist things through the wall. I can’t even escape racism at my own home,” the text overlay on @sunshinelively’s video reads.

“I can hear you,” she says to the man, who is standing at his door, holding it open. “Every time you’re saying, like, the racist things, I can hear you.”

In response, the man says, “Oops, we were just joking.”

“Like when you yelled ‘[N-word]’ the other day, I could hear you,” she says back.

“Oh, OK. Sorry,” he says before shutting the door.

The TikToker claims she identified the neighbor in follow-up videos.

In one follow-up, she says the neighbor showed up at her door with a sheriff. “He admitted to yelling the racial slurs to the sheriff,” she alleges. “He attempted to make the sheriff pretty much make me accept his apology.”

“I told him I did not accept his apology because it was obvious he was doing this on purpose,” she continues.

She says she asked the sheriff to make sure her neighbor doesn’t contact her again. She also says she plans to stay at a hotel for a few days and asks viewers to donate to her “hotel fund” via Cash App and Venmo. “I am preparing for relocation,” she said in response to a commenter who told her to break her lease and move.

The situation divided viewers, with some criticizing the TikToker under her original video and arguing the man should be able to “say whatever he wants in his home.” Others argued he could have been playing a video game, rather than yelling the slurs at her.

“Coming from a Black man, he’s probably just trying to play the game,” one TikToker said in a stitch that was viewed more times than the original TikTok, with 1.9 million views.

“He shouldn’t be saying that stuff, but unfortunately he does have the right say whatever he wants in his home, hence his ambivalence,” another commenter said.

In response to such comments, @sunshinelively made another video, in which she says she is being gaslit.

“Y’all really go out of your way to gaslight Black women, and it’s sad,” she says. “Can you imagine if a white woman said that she had a Black neighbor who’s yelling obscenities at her through the wall? Y’all would lose y’all’s minds.”

@sunshinelively did receive a fair share of support as well, and many criticized the man’s response.

“Did he say whoops?” one questioned with the flushed emoji.

“It was the ‘whoops , just joking ‘ for me,” another said with the angry emoji.

Others took aim at commenters defending the man. “The amount of people arguing ‘well it’s his house’ lmao,” one said.

The Daily Dot has reached out to @sunshinelively via Instagram direct message but could not reach the man she identified as his online presence appears to be nonexistent.