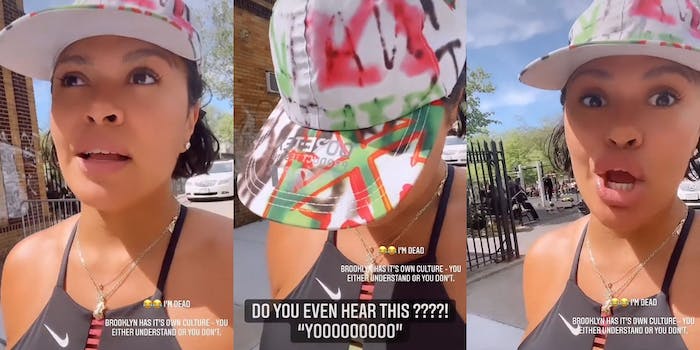 ‘Sound like you walking into Rikers’: Woman has to leave park because men catcall her so intensely while she works out

'I don’t think they understand that this is extremely threatening for some women.'

A woman has sparked discussion on TikTok after posting a video showing her getting catcalled at a Wingate Park in Brooklyn. The catcalling is so intense that the woman decides to leave the park.

The video shows Jax (@justjax2u) walking through the park, which she says she was told to visit by a friend. In the background, numerous people yell at her and make comments toward her.

Her TikTok currently has over 1.4 million views.

“My friend told me to work out at this park. It’s a definitely fucking no,” she says at the beginning of her video. “It’s a no.”

She later posted a follow-up video of her leaving the park, where similar catcalling can be heard.

@justjax2u Brooklyn girls don’t scare too easily but i sure was intimidated 🤷🏻‍♀️… @legendarybrolygainz everyone thinks you were trying to have me set up today. #brooklyn #parkfitness #wingatepark #yo ♬ original sound – JUSTJAX2U

“Brooklyn girls don’t scare too easily but i sure was intimidated,” she wrote in the caption of the second video. In the comments section, Jax detailed that she was a New York native “born at kings county… and raised in Bedstuy.”

Commenters first questioned the friend who suggested the park to Jax.

“This is definitely not suggestion from a friend,” one user wrote.

“So your friend told you to work out at the PRISON YARD!!????” another questioned.

To these comments, Jax responded that this friend was a man “so his reception is quite different from mine.”

She also shared that being catcalled is a common issue for women throughout New York.

“NYC is known globally for this nonsense,” she explained in a comment. “Women learn to navigate around it but it’s super prevalent particularly in [Brooklyn].”

Many other commenters chastised the men for engaging in such a behavior.

“I don’t think they understand that this is extremely threatening for some women,” a commenter wrote. “We don’t enjoy it.”

“The fact men don’t think this is a problem,” another claimed.

Above all, users were surprised that the catcalling was so intense.

“Immediately no,” a TikToker stated. “Sound like you walking in to Rikers.”

“Men live in a different world and this just proves it,” another wrote.

The Daily Dot reached out to Jax for comment via email.