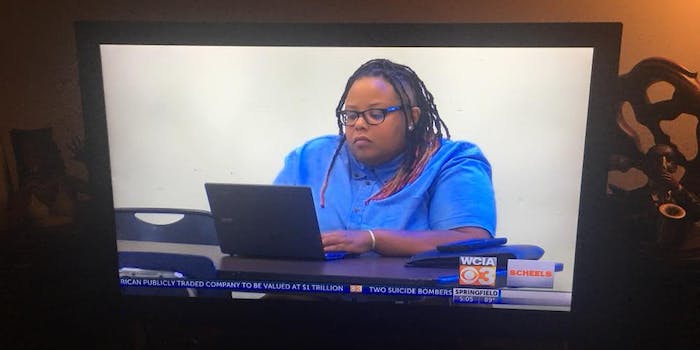 She was caught job application-handed.

A woman who snuck away from work on her lunch break to apply to other jobs thought she was keeping a low profile—until a local news station filmed her at the job fair.

The woman, 33-year-old Ja’Naea Modest, went viral on Facebook last week for a post showing herself on the Champaign, Illinois, news station WCIA.

“So I didn’t want my current job to know I was looking for another job,” Modest wrote, “why the damn news filmed me at the job fair. Smh.”

So I didn't want My current job to know I was looking for another job. why the damn news filmed me at the job fair. Smh

LMFAOOO GOD WAS NOT ON YOUR SIDE WITH THIS ONE SIS

Modest told BuzzFeed News that she loves her current position at a nonprofit where she works with people with disabilities—but she’s also trying to save money to move.

That’s why she decided to head over to a job fair one day on her break, changing clothes before and after so her employers wouldn’t suspect anything. She was completing an application onsite when she was unknowingly filmed for the news station.

“I was focused on the application,” Modest told BuzzFeed. “I did not know [the local news] was there. I had no idea what was going on—I came back, changed my clothes, and did the rest of my shift.”

But later that day, her friend’s dad showed her the broadcast. And of course, now her current employers (and pretty much all people in the local area) know of her job search.

“I’m not trying to see them,” she said. “I’m avoiding everyone like the plague.”

Luckily, Modest said her manager hasn’t confronted her about it—yet.

Say you’re a volunteer counselor in your free time

Meanwhile, BuzzFeed reports that Modest is using the media attention to promote a shoe drive in her community that will collect school supply and clothes donations for the coming school year.