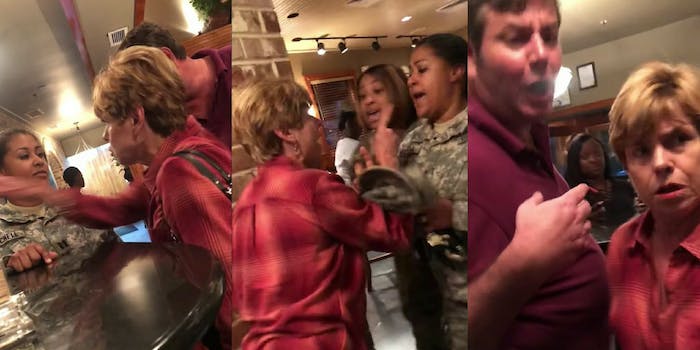 Video of a white woman and her son verbally attacking and physically charging at two Black soldiers has gone viral, showing the internet that even “supporting the troops” is conditional. As a result of the altercation in Bibb County, Georgia, sheriff deputies arrested 71-year-old Judy Tucker on small battery charges against one of the soldiers, who is pregnant.

According to a sheriff’s report sent to the Daily Dot, Tucker and her adult son confronted two female U.S. Army Reserve captains, 34-year-old Stephanie Mitchell and 27-year-old Treasure Sharpe, on April 14. Both parties were at a Macon-area Cheddar’s restaurant, and the confrontation happened after the women drove around Tucker’s car as it backed into a parking space, according to LaKeycia Ward, who witnessed and took footage of the altercation.

The report from the arresting deputy, Stephen Phipps, states Mitchell and Sharpe’s car was backing into a parking space when Tucker’s son approached them and told them to “learn how to park” before calling them “dumb bitches.” However, Tucker told Phipps “multiple times” that it “started because she was white and it was a race issue.”

Once inside the restaurant, the son again approached the women and called them “Black lesbian bitches,” at which point Mitchell tried to calm the situation by telling him to refrain from swearing and name calling.

Tucker then approached the women, too, telling them, “You were getting in our way while we tried to park,” at which point Sharpe, who is pregnant, and Ward, began recording the incident.

The deputy report states that at this point, Tucker came back at the women with “rage and force,” and began “swinging at [Sharpe] striking her in the face.” She later admitted to the deputy that she hit one of the women, but only because “they hurt her hand,” referring to when Mitchell holding her arm back from Sharpe. When Sharpe told the Tuckers she was pregnant, the son asked, “Oh really, by her?” pointing to Mitchell.

The deputy report says according to the video taken by Sharpe that “it was never shown that…[Mitchell or Sharpe] did anything wrong.” Meanwhile, the video taken by Ward has since received thousands of views on YouTube, Twitter, Facebook, and reposting accounts on Instagram.

After the main altercation took place, Mitchell and Sharpe’s statements and cell phone footage showed that Tucker’s adult daughter approached the women and began “lunging at them multiple times” to try and block Sharpe’s cell phone from recording.

Videos that Sharpe took after the altercation and when the sheriff’s deputies arrived were shared on Twitter, and later deleted, by a sorority sister of Sharpe’s. The sorority sister told the Daily Dot that Sharpe has pressed charges against Tucker and Tucker’s son and daughter, but that Sharpe cannot comment publicly on the matter because she was in uniform.

“We are aware of an incident that occurred over the weekend involving two of our Soldiers in Macon, GA. Army Reserve Soldiers, families and civilians are our most valuable resource. Health, welfare, and safety is always at the forefront of our minds with all we do. This incident is the subject of an ongoing police investigation and it is improper for us to comment on the outcome. We will continue to review the information related to this case as it becomes available.”

The Cheddar’s restaurant chain sent NBC affiliate station 11alive the following statement: “We were appalled by the behavior of the individuals who confronted the two female service members. Such behavior flies in the face of our values and those individuals are no longer welcome in our restaurant.”

Sharpe’s and Mitchell’s story has since gone viral, getting headlines in the Daily Mail, as well as veteran- and armed forced-based publications. On Facebook, video of the altercation has garnered more than 2.5 million views.

A Georgia woman was arrested after assaulting two soldiers, one of whom was pregnant. The woman and her adult children were asked to leave the restaurant. https://t.co/Llp17vNOmo

Another video shows Tucker crying while being arrested.

An email address for Tucker’s art restoration business, the evidence of which has since been taken offline, did not respond to the Daily Dot’s request for comment. Tucker was released from Bibb County Jail Saturday night on $650 bond.