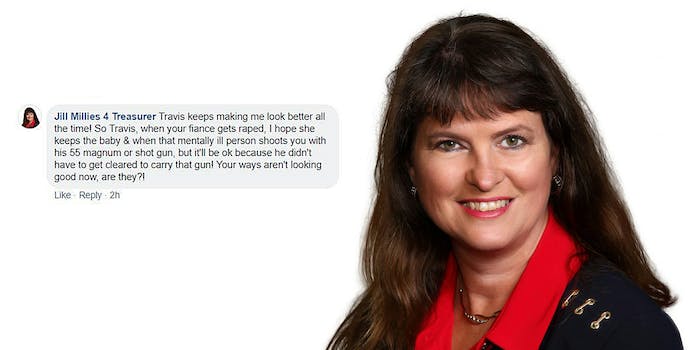 "I don’t wish rape upon any woman — that is the worst thing," the candidate said in her apology.

The race for Wisconsin treasurer turned sour this week when one Republican candidate made a comment about another on Facebook, saying that she hopes his fiancé keeps the baby if she is raped.

Jill Millies of Big Bend has since deleted the comment, but her opponent, Travis Hartwig of Oak Creek, took a screenshot before it was taken down and posted it on his Facebook page. “This is the absolute gutter of politics,” Hartwig wrote. “We will not stand for this behavior.”

Millies apologized for the comment on her campaign’s Facebook page yesterday. She claimed the comments were the result of her opponent and his supporters drawing her into a debate on abortion. She also referred to a recent survey published by iVoter Guide, wherein Hartwig stood against abortion without exception. Millies, on the other hand, is not an absolutist and believes abortions should be granted in circumstances of rape or when the mother’s health is in danger. According to Millies, she was trying to make a point about the dangers of Hartwig’s abortion stance.

“I don’t wish rape upon any woman—that is the worst thing,” Millies told the Journal Sentinel. Millies said learning that Hartwig wouldn’t even make an exception to allow rape survivors access to abortion pushed her to make the harsh comment. “He said he wouldn’t do anything about it. I was like, really Travis, you wouldn’t do anything?”

“When faced with facts, my opponent turned to personal threatening attacks,” Hartwig said of the comment in his post of the screenshot. According to Millies, however, it was not facts, but harassment from Hartwig and his supporters that drew out her response. “I’m just sick and tired of Travis and his little minions coming onto my Facebook page and bashing the hell out of me all the time,” she said to the Journal Sentinel.

The screenshot does not show who or what she was responding to with her comment. “Push come to shove, this is my first time in politics,” Millies said. “I guess I just blew it after awhile.”