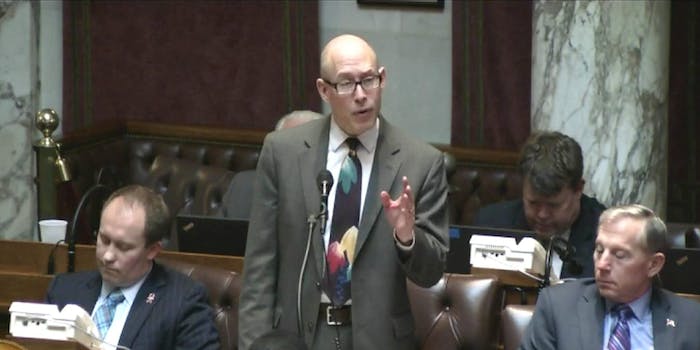 Listen up, ladies: please, for the greater good of the U.S. economy, choose against having an abortion to instead birth your little bundle of joy into this wonderful, capitalistic world. At least, that’s how Wisconsin Republican Rep. Scott Allen sees your pregnancy—a means to mass production.

On Thursday, the Wisconsin state Assembly approved a bill that would block most abortions from being covered by state health insurance, except in instances of rape, incest, or if the pregnancy threatens the mother’s life.

However, it was during his argument when Allen fell off the rails—he asserted that Democrats were “ironically” getting in the way of economic growth because they allowed women to forgo bolstering the labor force when they elect to have an abortion, instead of going through with the abortion and giving birth to another mean, labor-producing machine.

OK, Allen didn’t say it in those words, but despite his analytical language his message was loud and clear.

Because women are choosing to have abortions—or, because Democrats were allowing women to choose to have abortions—Allen argued the labor force has declined as a result. Therefore, funding abortion with health insurance plans for state employees was in the worst interest of the government.

Abortion arguments aside, Allen’s objectification of women as labor-producers is nothing short of disgraceful. His push for “America first” effectively dehumanizes women as people and argues that the government should, as literally as possible, be in charge of a woman’s right to have an abortion for the benefits her pregnancy will bring the economy. To Allen, women are not humans capable of independent thought, nor even laborers of their own—just laborer-producing machines.

Watch his full bid for the government to control a woman’s reproductive rights below:

WOW. WI Rep. Scott Allen thinks women should be forced to procreate for the sake of the labor market.

Women are PEOPLE, not incubators. 😡 pic.twitter.com/I189JGSoqp