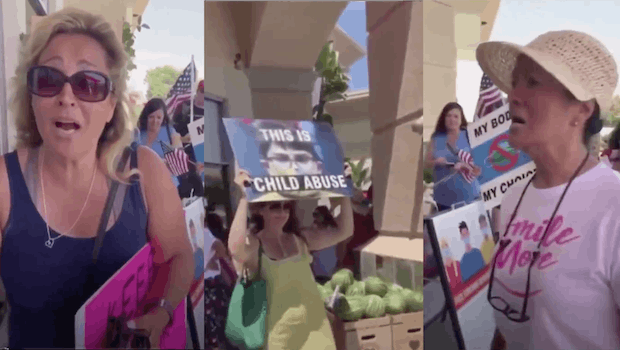 In the video, the women call it a 'war crime' and 'worse than communism.'

A “wild pack of Karens” were spotted outside of a grocery store in California on Saturday participating in an anti-mask rally.

Footage of the incident, which was originally live-streamed on Facebook, spread across social media this weekend because of the participant’s over-the-top behavior.

The group was seen protesting outside the entrance of a Mother’s Market & Kitchen in Costa Mesa after being blocked from entering.

The rally, which was in protest of COVID-19 restrictions, was initially held nearby but somehow ended up at the store.

The video begins with one maskless woman frantically demanding to be let inside.

“I don’t know what country I’m in,” the woman begins. “I thought I was in the United States.”

The woman behind the camera goes on to claim that the store is “keeping customers hostage” after the front doors were allegedly locked.

Another Karen can be even heard stating that the incident “is worse than Communism.”

Demonstrators were seen carrying everything from flags supportive of President Donald Trump to signs alleging that masks are a form of “child abuse.”

The woman filming becomes even more irate as the clip continues.

“This is a war crime,” she says. “This is crimes against humanity happening right now…”

The footage eventually ends with numerous police officers arriving on the scene.

While it’s unclear what happened next, the Orange County Register reports that two women were ultimately arrested on suspicion of trespassing.