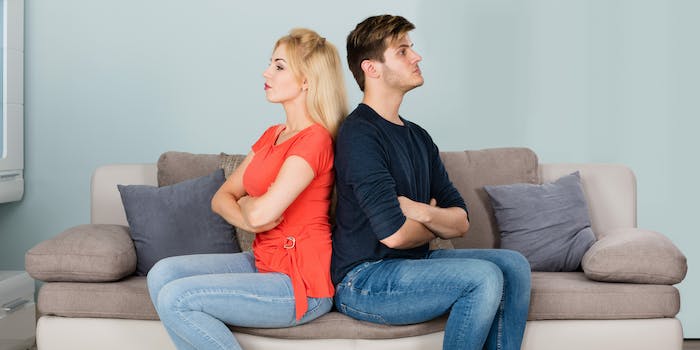 It maybe has something to do with his engagement, for starters.

Well, that’s at least what one New Yorker thinks—an “Upper West Sider with a muscular build and a full head of hair” by the name of Dan Rochkind. He is d-o-n-e, DONE with dating hot women, kind of because he’s engaged to one, but mostly because hot women are dumb and are in no way valuable beyond their appearances!

In a very reasonable, very well-thought-out article for the New York Post titled “Why I won’t date hot women anymore,” 40-year-old Rochkind explains that he’s completely donzo when it comes to courting “the hottest girl you could find.” He may have spent the better part of his 30s “sowing [his] wild oats,” but rest assured, Rochkind is tired of being subjected to the stupidity of such brainless beauties.

“Beautiful women who get a fair amount of attention get full of themselves,” he told the Post. “Eventually, I was dreading getting dinner with them because they couldn’t carry a conversation.”

Rochkind is doing fine, though. He’s engaged to a conventionally attractive (if not also hot) woman by the name of Carly Spindel. She’s not a model (a point that Rochkind and the Post emphasize not once or twice, but five fucking times) but a matchmaker. The couple met through Spindel’s mom, who is also a matchmaker (wild, right?!) after she saw Rochkind at the gym and told him she had his perfect girl in mind.

“[She] is a softer beauty, someone you can take home and cuddle with, and she’s very elegant,” Rochkind said, a phrase that you almost can’t believe wasn’t written by Reductress. “And she’s 5-foot-2, so she can’t be a runway model, but I think she’s really beautiful and is prettier than anyone I’ve dated.”

See that? Even average beauties are still extremely valued for their cuddly, elegant bodies and most definitely not anything that has to do with their personalities, education, or other engagements.

Yes, like many a horrid Post piece before this, Twitter took to burning Rochkind and the publication after the article went live on Wednesday. The post itself features three other pretty young thangs, two women and one man, who have quit dating models and have made the responsible decision to settle for conventionally attractive people who could be models, but it’s Rochkind’s critique of his fellow hot mankind that makes him the perfect Post villain.

Does anyone have Dan Rochkind's number? I want to see if he'll go out with me, sounds like a real catch pic.twitter.com/EAFS014T8N

Dan Rochkind is right up there with MLK & Ghandi in moving society forward #thestruggleisreal pic.twitter.com/qUqgKuvXmq

Lots of reasons not to date hot women:
– She may have a fever, be contagious
– She may burn nearby marshmallows
– What if she's the sun?

How Douchebags Give Women Compliments: I gave up hot women to date "merely" you, babe https://t.co/ci8SVVciZ0

The saddest thing about that "Why I Won't Date Hot Women Anymore" article is the guy featured in it doesn't have a Twitter for me to troll.

The other man featured in the article, another nearly-40-year-old hot bod, is quick to point out that while other hotties are very dumb, he’s actually very smart because he knows how to speak a dead language:

“From my personal experience, people who are better looking are less likely to pursue advanced degrees, or play an instrument or learn other languages,” says Benedict Beckeld, a 37-year-old Brooklyn writer with a doctorate in philosophy and the body of an Adonis. But he’s quick to note that he’s not just a great set of abs—he also plays the violin and speaks seven languages.

But ultimately, underneath these contradictory but somehow not satirical arguments, we get it. If you wanted to explain why you hate hot people, Rochkind, you didn’t have to lie.

These are the real reasons you and the other hot people have stopped dating hotties:

1. You’re in a committed relationship and don’t date at all anymore.

If we cut the “woe is my luck with hot people” crap, we’ll see that Rochkind really stopped dating hot people because he’s in a two-year-long relationship turned engagement with a hot person. Because that’s the logical thing to do when you’ve agreed to be in a monogamous relationship with someone: you stop dating other people, regardless of how hot they are. Mysterious clickbait headline solved.

2. You were set up with a matchmaker by a matchmaker who happens to be your soon-to-be mother in law and they want their company featured in the New York Post.

This part is so glaringly obvious it should have just been the focus of the entire story: “New York City matchmaker finally finds love herself after being matched by her business partner—her mom.” The mother-daughter duo have a freaking business together hellbent on pairing together lonely souls tired of wading through dumb hot people and looking for real commitment. Your fiancee’s matchmaking service was so great that it turned you off hot people FOR GOOD, how great is that! If this isn’t a secret publicity stunt masquerading as journalism…

3. You’re 40 years old and hot 20-year-olds have no interest in dating you because you have nothing in common (and you’re old!).

4. You realized the hot person you were dating was not nice to you or wasn’t into the same interests as you, so you stopped dating them and started dating a different hot person.

The two women interviewed for this piece, Sonali and Megan, say that their former hottie boyfriends were either too strict about their diet and exercise routines or kept ghosting them, which are completely valid reasons to not want to date someone. But c’mon, Sonali still wants to date someone who’s “in decent shape,” while Megan has found herself a “boy-next-door” type—they’re still looking for hotties! Just hotties who are into things they like and will text them back, too.

5. You’re the hot person whom hot people are tired of dating.

In defense of hot people, hot people are people too! It’s reasonable to think that anyone who’s constantly objectified for their looks and is never courted for their interests might get tired of dodging someone who’s only concerned with dating hot people.

Just the fact that Rochkind makes the distinction that his finance is too short to be a model but is still prettier than his past hotties is a clear indication that he is one of those dudes who’s too fixated on physical appearance, even after proposing to a conventionally attractive non-hottie hot person. At least she’ll have her matchmaking career to help guide her, should (if? when?) things go south.