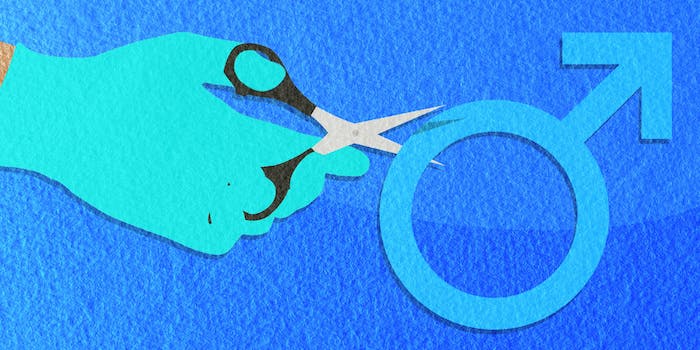 This is what it’s really like to have a vasectomy

It was midnight on a Thursday and the kids were asleep. My surgery was more than eight hours away but this was the moment I feared most: shaving my balls.

Even a small nick to the chin can cause a seemingly endless stream of blood. What would happen if I slipped up down there?

Due to an abundance of caution and a lack of past routine maintenance, I spent almost an hour carefully removing all the hair from my scrotum—roughly the same amount of time it took to get in and out of the urology center the following day. Yup, in a state where politicians are hell-bent on limiting women’s reproductive choice, I was able to secure permanent birth control in just over an hour, including a 30-minute consultation with a doctor I had never met before. I owed nothing more than a $35 insurance copay.

It’s tempting to say it takes balls to get a vasectomy but, for the vast majority of men, it’s pretty simple and painless. (That said, if you search for vasectomy horror stories, Google will happily oblige.) In a nutshell, the doctor cuts a small incision in the scrotum in order to snip the vas deferens, which is the tube that carries sperm to a party where it hooks up with semen before blasting off into the wider world. Post-vasectomy, semen still ejaculates but no sperm comes along for the ride. Some 500,000 men undergo a vasectomy in the U.S. each year but that’s still far less than the number of women who receive tubal ligation, a surgery with higher risk of complication.

Tube tying or an IUD are other viable long-term birth control alternatives. But after years of mood-altering hormonal birth control, 18 months of pregnancy, two C-sections (one of the traumatic, unplanned and emergency variety), multiple years of breastfeeding, pumping, and countless other thankless tasks most moms perform on a daily basis—well, let’s just say it was time for my body to bear some of the burden of family planning.

We’re blessed with two kids—a three-year old daughter and and one-year-old son. The duo keep us busy (to say the least) but parenthood only rarely feels completely unmanageable. We feel like a complete unit, plus we all fit neatly into our four-door hatchback. Yet the finality of the decision to get a vasectomy can make it more difficult than the procedure itself. My wife comes from a three-sibling family and I’m a third child myself. My kids and I wouldn’t exist if my parents had made the same call. It was important that having another child or not be an intentional decision, not left to the whim of a possible unintended pregnancy. We mourned our theoretical third baby but ultimately remaining a family of four just felt right.

Then of course, there’s the money. As is true in 31 states, childcare where we live in Texas costs more than college tuition. We drop more on childcare each month than we do on our mortgage. And unless we can strap it to the roof, baby number three would mean trading in that hatchback for a minivan. A third child—while totes adorbs, I’m sure—would be financially disastrous. And my wife and I are in the privileged position of hetero homeowners with decent jobs, health insurance and a strong community of family and friends who wouldn’t let us starve or live on the street. Money is tight, but most have it far tougher. I’d like to say that we weighed the carbon footprint of additional offspring but in truth, we simply can’t afford to raise another child for 18 years. (And we would eventually like to get some damn sleep.)

The urology practice I visited placed an odd amount of emphasis on the jockstrap—apparently it’s important to keep things neatly tucked in place after surgery. It was the first thing mentioned on the doctor’s written post-op instructions and one of the few things emphasized the only time I spoke to someone from the office on the phone. If I didn’t bring an athletic supporter, they reminded me, they would happily sell one to me for $25. I haven’t worn a jock since my glory days as a plodding and undersized middle school football receiver (Go Warhawks!) so I was stunned by the variety available on Amazon. Leather, studded, see-through, assless full-body jock singlet —you name it. The search yielded an unending parade of crotch shots. Hey, strippers are Prime members, too. Hell, there is even for sale on Amazon right now for a (used?) jock autographed by unremarkable retired big league pitcher Mark Grant . And for only $339.99! Tempting as that was, I opted for a basic 12-dollar 3-pack with fun colors and free shipping to boot.

On the big day, my wife took a personal day so that she could drive me home after the procedure and care for me. At least that was the plan until the day before when our son was sent home from daycare with diarrhea and our daughter started projectile vomiting. This was clearly a message from the universe. Was it conspiring to prevent us from making the appointment or a sign that a vasectomy was more necessary than ever? We settled on the latter and had a friend watch the kids as we drove off.

As we walked from the car toward the generic brick office building, the inevitable moment of doubt set in. Admittedly, this had more to do with the immediate reality of sharp objects slicing my genitals than the desire for more children. “Wait, are we sure we want to do this?” I asked. “We can turn around right now if you’re not ready,” my wife assured me. “But we’ll just have to reschedule it for later.”

In an exceptionally soothing voice, my doctor described what was about to happen to my balls. We talked family and mundane medical history and then. with the obligatory consultation out of the way, I undressed and climbed under a sheet on a high table. A nurse, who presumably helped me into my jockstrap later, asked if I had any musical requests. Otis Redding (the soundtrack to my wife’s and my first wedding dance) and Al Green (who was playing as our first child was born) lulled me to sleep as the IV sedation kicked in. And then….well, I don’t know. The next thing I remember is staggering through my front door like the drunken nights of youth gone by.

I spent the long weekend shoving a rotating medley of frozen vegetables into my jockstrap and explaining to my 3-year-old why she couldn’t sit on my lap in the vaguest terms possible. There was a dull ache in my nuts for a day or two, but the pain was mild—nothing prescription-strength ibuprofen couldn’t handle. In fact, the most discomfort I felt came from the prickly sensation of my scrotum hair growing back. By Monday I was back in the saddle for my regular bike commute to work.

The doctor advised that I wear a jockstrap for a week and the reason became apparent a few days later. One morning I looked in the mirror and my left testicle was hanging halfway to the floor. I was horrified. Pancho and Lefty had never been so far apart and I had the ball sack of an 80-year-old man. Time to panic. Was I cursed to a lifetime of “grandpa balls”? Was droopy the new normal? Some online forums gave me solace that I wasn’t alone and thankfully everything was back to normal a week later.

The biggest payoff—and the top motivation for most beyond no future kids—is worry-free love-making without other birth control. When the overriding thought in your brain is OMG WE CANNOT HAVE ANOTHER BABY, it tends to put a damper on sexy time. But before you enter the carefree zone, all existing sperm that’s already traveled through the vas deferens has to be cleared out of the system. According to my doctor, that usually takes about six weeks or 12 ejaculations. “If you can knock it out in a weekend, more power to you,” he winked.

I wasn’t quite that efficient but—thanks to a planned weekend with no kids that we hoped to take full advantage of—I was placed on a strict wanking regimen. Starting two days after surgery, I had 18 days to squirt a dozen times. It’s the most I’ve masturbated since I was a teenager. While fun at first, it felt like a genuine chore by the time I limped over the finish line, the final dose spilling into a sterile (and decidedly unsexy) specimen cup.

My wife —did I mention she’s the best?—dropped off the splooge sample for inspection at the urologist on the morning of our road trip. (Next on her hilarious list of errands was tracking down dry ice to haul frozen breast milk cross-country because parenting!) The next day we learned the good news with a phone call from the doctor’s office. No more junk in the spunk!

So, happy World Vasectomy Day to all my snipped brethren. Here’s to no more children, eventual sleep, and copious amounts of spontaneous sex.