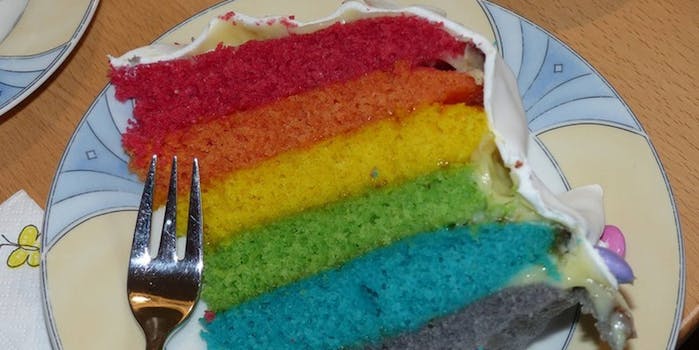 'I apologize to the LGBT community for diverting attention from real issues.'

Pastor Jordan Brown admitted on Monday that his allegations against Whole Foods writing a homophobic slur on a cake were a hoax.

In a statement sent out to media, Brown announced that he was dropping his lawsuit against the Austin-based grocery chain and that he manipulated the media and diverted “attention from real issues” facing the LGBT community.

Today I am dismissing my lawsuit against Whole Foods Market. The company did nothing wrong. I was wrong to pursue this matter and use the media to perpetuate this story. I want to apologize to Whole Foods and its team members for questioning the company’s commitment to its values, and especially the bakery associate who I understand was put in a terrible position because of my actions. I apologize to the LGBT community for diverting attention from real issues. I also want to apologize to my partner, my family, my church family, and my attorney.

Brown’s accusations came in mid-April after he claimed to have bought a Whole Foods cake that had the slur “fag” written on it in blue icing. After displaying the offensive cake in a video, Brown found legal representation and sued the store.

But Whole Foods quickly countersued, accused Brown of fabricating the story, and aired security-camera footage that revealed discrepancies in Brown’s tale of woe—most notably, that he had changed the packaging and that the message in icing was clearly visible to everyone as the cashier rang up his purchases.

In April, Brown told the Daily Dot in an interview that his alleged discovery of the homophobic slur after his cake purchase was “so humiliating and offensive” and that he sued Whole Foods in order to “bring awareness to the LGBT community that incidents like this cannot happen.”

Shortly after the incident went viral online, Whole Foods filed a lawsuit and sent the following statement to the Daily Dot.

That’s exactly how the cake was packaged and sold at the store. Whole Foods Market has a strict policy that prohibits team members from accepting or designing bakery orders that include language or images that are offensive. We stand behind our bakery team member, who is part of the LGBTQ community. And we appreciate the team members and shoppers who recognize that this claim is completely false and directly contradicts Whole Foods Market’s inclusive culture, which celebrates diversity.

Brown is the pastor of Austin’s Church of Open Doors, which he refers to on its website as a “non-denominational, non-traditional, Christ-centered, welcoming, LGBT-friendly, worshiping church.” But when the Daily Dot investigated the church’s listed address and found that it led to a luxury apartment building in South Austin, something seemed fishy.

In an unpublished Daily Dot interview, the property manager of the AMLI South Shore apartments said he had never heard of a church meeting at the apartment complex.

“This is an apartment community and we are not affiliated with any religious group,” a property manager named Robert told the Daily Dot. “We do have community rooms that residents can use but we don’t collect information about what they’re doing. We don’t have anybody using the rooms every Sunday.”

The manager then said he was concerned about the property being listed as the location of a church.

“I don’t know why he’s listing that, I don’t know if they’ve met here before,” Robert said. “I’ll have to look into that and send him a request to take it down.”

Brown’s church is registered as a 501(c)3 tax-deductible charity, and the website has a PayPal link that accepts donations. According to the site, donations to Brown’s church will go toward “community outreach, building drive, music ministry, online campus ministry,” and “marketing resources.”