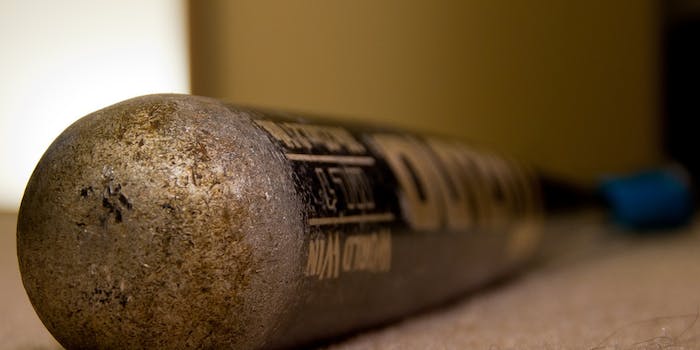 It looks like he's smuggling a baseball bat in his pants.

When it comes to penis size, the Daily Dot has taken a stand against the maxim “bigger is always better” on more than one occasion. A man on Tinder, however, has taken that trope to heart. As discovered by the Frisky, he’s smuggling what appears to be an underweight toddler or a plastic Fisher-Price softball bat inside his sweatpants. 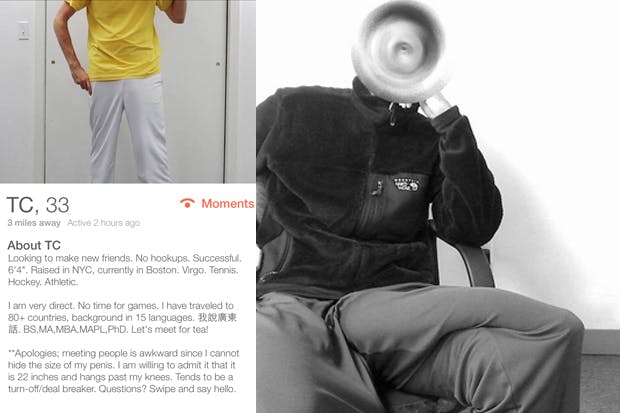 Spotted by a Boston-based woman who happened to be blithely swiping through Tinder, “TC” (likely short for Tremendous… something?) is 33 years old and based in Boston. On his profile, he reveals the salient points about his personal history—he’s six-foot-four and a Virgo—but it isn’t until you get to the end that he drops the ultimate bombshell.

“Apologies; meeting people is awkward since I cannot hide the size of my penis,” he writes on his profile. “I am willing to admit it that it is 22 inches and hangs past my knees. Tends to be a turn-off/deal breaker. Questions? Swipe and say hello.”

TC is the ultimate Tinder troll, overcommitting to one dumb joke. Haha, dude, your penis is too big, very funny [swipes left instantly]. He even posted a few pantsless shots, censored with Photoshop’s mosaic filter. 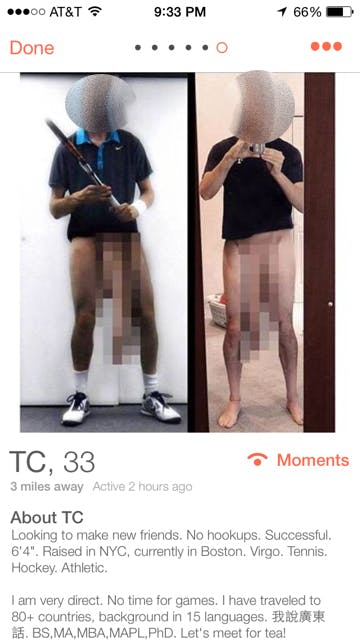 Given that the largest human penis on record is 13.5 inches, unless TC is part humpback whale, his member is very, very fake. But wouldn’t it be awesome to live in a world where dudes had 22-inch dongs and you could wrap them up like Slinkies and curl up next to them if you were cold? Or you could just bat it around and pretend you were a cat with a giant ball of yarn. That’s what I would do. Just sayin’.