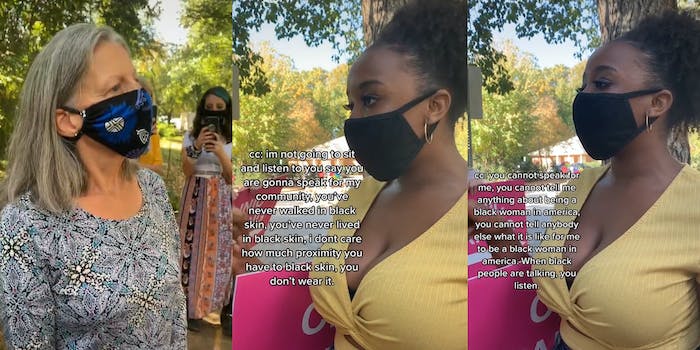 'If you have Black people in your life and you love them, you will never say that sh*t again.'

A viral TikTok shows a Black woman shutting down a white woman who claimed to speak on behalf of Black people because she had Black grandchildren.

The video, uploaded Wednesday by TikToker @jaiciesmall, took place about three weeks ago at a Charlotte, North Carolina protest held by Charlotte for Choice, a nonprofit that advocates for women’s bodily autonomy and reproductive justice. It shows a woman who goes by Bri (@msxdimples on TikTok) arguing with an older white woman. According to @jaiciesmall’s caption, the white woman “told us that she can speak on behalf of Black people because she is related to some” before the video began.

Bri is having none of that flimsy argument.

“You will never know what it’s like to be me,” she says. “You’ll never know what it’s like to be scared to go into a job interview with your hair the way that it grows out. I straighten this shit when I think that I’m going to a job interview because someone won’t hire me because of it. Only seven states have a law in which it is illegal to discriminate against me because of my hair.”

“I am not going to sit here and listen to you say that you’re going to speak for my community,” she continues. “You’ve never walked in Black skin, you’ve never lived in Black skin. I don’t care how much proximity you have to Black skin. You don’t wear it, so you cannot speak for me. You cannot tell me anything about being a Black woman in America. You cannot tell anybody else about what it’s like for me to be a Black woman in America. When Black people are talking, you listen. You don’t tell us about what we go through. If you have Black people in your life and you love them, you will never say that shit again.”

“Do you know what I’ve been called?” the white woman asks.

In the two days since @jaiciesmall uploaded the viral video, it has earned over 2.6 million views and 1 million likes. In a series of videos on her own profile, Bri offered more details about the altercation.

“I entered the conversation because I heard her attempting to negate something that another Black person was telling her about our experience and using the fact that she has Black grandchildren as her justification for having the right to ‘speak for us,’” she says. “She was using her Black grandchildren as a ‘get out of racism free’ card.”

Bri—who preferred not to share her full name out of privacy concerns—tells the Daily Dot that the responses she’s received about the video have been a mixed bag so far.

“The feedback has been overwhelmingly supportive and positive, but I do admit I’ve been a bit disturbed by the number of people commenting things like, ‘So basically, you don’t want allies’ or, ‘OK, so we shouldn’t support BLM,’” she says. “I just really want to emphasize that that wasn’t my message. My message was that speaking up for someone and amplifying their voice is not the same as attempting to speak for—or in [the white woman’s] case—over them. As an ally, your focus should be to silence the noise and naysayers so our voices can be heard. You can’t and shouldn’t try to be our voice.”