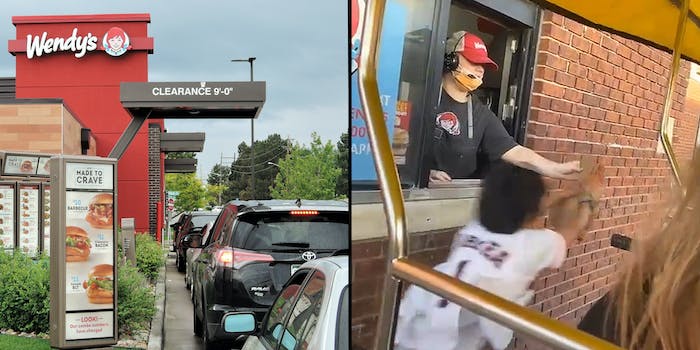 ‘The way the whole car went quiet as soon as she said it’: White Wendy’s worker says N-word after child runs off with customer’s food in drive-thru

'That (N-word) literally just grabbed your shit, yo.'

Viral TikTok footage shows a white Wendy’s worker saying the N-word after a child ran off with a customer’s food in the drive-thru.

The video, posted by TikToker @smooveeli4, went viral with about 2.9 million as of Thursday.

In the video, the Wendy’s worker leans out the drive-thru window to hand the customers their order. Then, a small child ran in between the worker and the customer’s vehicle, snatching the order out of the worker’s hand.

As the child ran away, the white worker says, “Dammmnnn, that (N-word) literally just grabbed your shit, yo. That was funny as hell, though.”

One passenger in the back of the vehicle, who appears to be the person recording the incident, laughs. The five other passengers don’t say anything.

Viewers were quick to point out the “awkward silence” in the video’s comments.

“The way the whole car went quiet as soon as she said it,” one viewer commented on the video.

“The awkwardness alone should prolly keep her from sayin it again. Hopefully,” another viewer commented.

One viewer wrote, “the guy in the front speechless LMAOAOAO.”

“They were processing what she just said,” someone else wrote.

Other viewers commented on how comfortable the worker seemed using the N-word.

“she said it so normally,” one person commented.

“i-…the normality in her voice when she said that,” another person said.

Several TikTokers commented on the video that the passengers shouldn’t have let the worker get away with using the slur.

“yall just gon let her say it,” one viewer commented.

“YALL SHOULD’VE SAID SOMETHING,” another viewer commented in all caps.

One user asked, “Y’all let her get away with saying allat?”

The Daily Dot reached out to the creator via TikTok comment and to Wendy’s via press email.