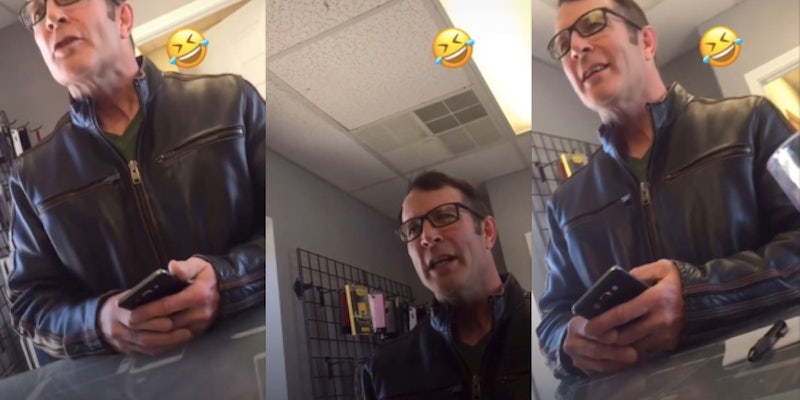 ‘If he knows so much why did he even go in there’: Customer insists that putting his phone in rice will fix it, argues with repair worker

In a viral video posted Aug. 24, TikToker and Phone Fix Craft employee Matt (@mattrsplattr0) shared a video of him and a man arguing about the difference between brown and white rice in regards to fixing a water-damaged phone.

The video has received over 3.5 million views, as of Monday.

The man, labeled a ‘Karen’ in the caption, was complaining about his water-damaged phone to Matt, who started recording as the man suggested using white rice to fix it.

The man continus to tell the creator that he heard from someone that morning who had put a whole video camera into a bag of white rice and “it solved the problem.”

“White rice does not repair an electrical connection that’s damaged,” Matt responds. The two men continued to debate between the effects of brown and white rice, and the TikToker called the man out for switching up his story.

“You have said three different things since you stood here,” Matt says.

The customer increasingly gets angrier with the employee as he explains how his phone just slid into water.

“You told me flat out white rice will not repair that,” the man says.

The man continues to fight about using white rice to fix his phone, accused Matt of lying to him, and threatened to get the police involved. Matt tells the man multiple times that he looked at the inside of the phone and that rice will not fix his problem.

“I come in here to your business and you tell me it won’t,” the man says.

“I can tell you the world is flat,” the TikToker responds, trying to make a point.

“A lot of people tell me it isn’t,” the customer says.

In the comments section, viewers were blown away by the interaction.

“If he knows so much why did he even go in there and the cops are going to do what,” one user commented.

“Oh my god the way I would literally walk away,” another viewer said.

“I would watch an hour of this conversation,” a third user joked.

The Daily Dot reached out to Matt via TikTok comment, as other methods of contact were unavailable.