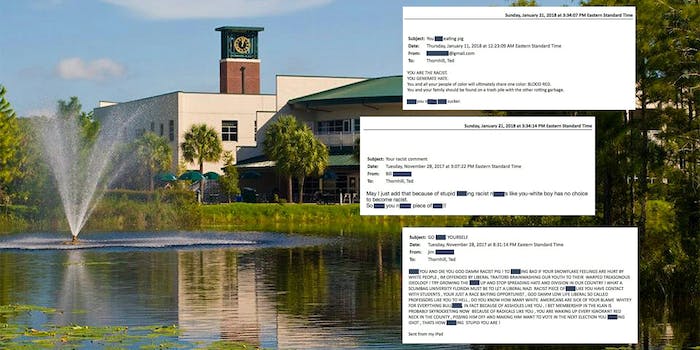 Death threats and hate mail keep arriving for the professor—but he's not backing down.

“I am white and will not apologize for being white.”

“You use the race card as your excuse not to prosper, instead of just admitting that your race is totally dysfunctional.”

“FUCK YOU AND DIE YOU GOD DAMM RACIST PIG!”

Over the past three months, Ted Thornhill, an assistant professor at Florida Gulf Coast University (FGCU) in Fort Myers, Florida, has received more than 120 pages of emails, over a dozen voicemail messages, and quite a few letters lambasting and threatening him with violence and death, including those statements above.

The hate mail and finger-wagging began in November, Thornhill said, shortly after the university announced that his 50-person class, “White Racism,” would be one of the courses offered in the spring. As Thornhill describes it, “White Racism” would examine ideologies, laws, policies, and practices that have established a system in which non-white people are racially dominated by white people.

His lesson plans include lectures, class-wide and group-led discussions, interactive dialogue, and situational observations that will allow students to watch, challenge, and better understand this “colorblind” racism—the kind that is less blatant than the use of racial epithets, but insists racism is no longer an issue, and disguises itself in microaggressions.

But in the months since its announcement, just the mere idea of Thornhill’s class has been dismissed by bigots and offended white people, with many critics writing that the U.S. now lives in a post-racial society and that Thornhill is the only one “making things about race” and “playing the victim.” Several hateful messages used the N-word, told Thornhill to “go fuck himself,” preached white supremacy, and wished for his family to be “found on a trash pile with the other rotting garbage.”

In other words, Thornhill is on to something: The community seems to be in dire need of an education regarding racism.

This instance of tension is just the latest development in a string of racist incidents at FGCU, following previous problems of lynching nooses drawn on whiteboards (twice in 2016), and an incident of fliers stating, “It’s OK to be white,” posted across the campus last year. On top of the blatantly racist responses Thornhill has received, it’s a wonder how the people preaching colorblindness and post-racialism can believe in such a warped understanding of the present.

According to the National Center for Education Statistics, FGCU’s undergraduate population of nearly 15,000 students is 65 percent white, 20 percent Hispanic or Latinx, 7 percent Black, and 2 percent Asian. A student of Thornhill’s, Bryan Oliva-Infante, told the Daily Dot that the anger directed at the class is an illustration of the degree to which the majority-white campus feels racially divided, a condition that he said existed before the Trump presidency, but has since grown through his Republican Party nomination, election, and first year in office (Lee County, where the school resides, went red for Trump). The student activist says he’s previously watched Trump supporters counter-protest a march celebrating international students with screams of “Make America great again,” and “Go back to your country,” and that two political organizations have also brought a reformed white supremacist to speak on campus this semester.

But despite the current political tension, the white racism that Thornhill addresses in his class has little to do with the mouth-foaming, vein-bulging, hate-spitting, white supremacists who have harassed him via email. That type of racism should be blatant enough for kindergarteners to recognize.

“The course isn’t based on this idea that overt racial bigotry is the principal type of racism constraining the life chances of Black folks and other folks of color. We know that type of racism is alive and well, we see it in the White House, in these ‘Richard Spencer’ characters. It’s always been around,” Thornhill told the Daily Dot. “But that’s not the essence of the course. The essence of the course is based on the fact that we live in a white supremacist society—one based on a racial stratification system where whites are positioned in the most favorable locations within the strata, and folks of color are differentially positioned below them, and by virtue of their location, they are afforded different opportunities and resources and life chances relative to whites.”

According to Thornhill, the firestorm commenced after a student with libertarian leanings contacted conservative and right-wing publications. Soon, the hate messages piled in, national media caught wind, and everyone on the internet had an opinion.

By the time classes began on Jan. 9, Thornhill had received so many death threats, he required an increased police presence around his classroom’s building. Thornhill says he’s glad FGCU has been taking the threats seriously.

Oliva-Infante, who’s a third-year political science student and activist, said that the controversy surrounding “White Racism” made the first two weeks of class feel tense and uncomfortable. Police and news media surrounded the campus, he recalled, and though he’s remained aware of his surroundings at protests and demonstrations before, he never expected to feel the compulsion to watch his back while seated in a college classroom.

Jhasmine Alder, another student in Thornhill’s class, echoed this sentiment, telling the Daily Dot that she found the police presence and constant press following people of color around, asking for their opinions, to be annoying. She feels the backlash has affected her, and that the class’ critics know nothing about the curriculum, instead basing their arguments on the opinions of others.

During the second day of class, Oliva-Infante said he watched a student arrive 15 minutes late, sweaty and out of breath, who he immediately felt “sketched out” about. Thornhill called the student out for being tardy, which the student explained was because he couldn’t find parking, before the lesson resumed. Oliva-Infante said he hadn’t seen the student around the campus before, but it wasn’t until 15 minutes later, during a discussion about white privilege, that his suspicions were confirmed.

Thornhill, recounting the incident, said he had asked a question, to which the person’s hand immediately shot up. After asking the man’s name, checking his class roster, then being told that he was a “late addition,” Thornhill checked the online roster to find this man wasn’t a student in his class but someone who had just snuck in past security. After being asked to leave, the man said, “OK, I’m gonna have a conversation with someone,” Oliva-Infante recalled, then exited.

“All my friends kind of looked at each other like, ‘Conversation with who? Are you going to our president, are you going to talk to the dean? Or is he gonna talk to his klansman?'” Oliva-Infante said. “It was so uncomfortable. It was so scary. It was definitely a real scary experience, but I’m just happy that he never came back.”

What seems to draw the most visceral response is the name of the class itself. Many critics say that “White Racism”—which has been taught and published in academia for decades—unfairly targets all white people who aren’t racist, and overlooks “other types” of racism, meaning “racism” employed by people of color against white people. Others say that Thornhill is the one pushing racism onto his students and subsequently “making” the world more racist.

But Thornhill isn’t here to entertain these exhausted arguments, all long-documented points white people use when confronted with the reality that inequality persists. Instead, Thornhill has shown his class some of these messages and intends to have the class analyze them later in the semester, giving students the opportunity to watch this vein of “smiling” racism play out in real life.

Not to mention, Thornhill, who has taught in this discipline for 13 years, along with many professors and scholars who came before him, is of the firm belief that people of color cannot be “racist,” as these biases do not give them systemic advantages, such as benefits from systems that white forefathers built to benefit their white successors.

“It seems to me that the fury among large segments of the white population over my course is largely a function of my violating the kind of sacrosanct ‘colorblind’ race talk. Whenever somebody talks about race in a way that upsets these folks, they say, ‘See? Those individuals are being divisive,’ so I’m being racially divisive by naming white racism,” Thornhill said. “The subtext is, ‘Just don’t talk about it.'”

It’s now been a month since the semester started, and conversations are robust, passionate, and in full swing. Thornhill and his students haven’t seen a disruption like the rogue “white privilege” student since—save for an “It’s OK to be white” poster attached to his door. Oliva-Infante, too, said he’s since been able to settle into the class and become more comfortable and engaged with his classmates. “White Racism” is one of the most diverse classes he’s been in, and he said he sees his white classmates engaged and actively learning.

Thornhill has even applied for the class to be approved as a permanent fixture in the sociology department, meaning that it would keep the name “White Racism” for all future courses. Since garnering national attention in outlets like the Washington Post and CNN, Thornhill said he has also seen a dramatic uptick in positive, supportive messages. The hateful messages did, however, at least double since the beginning of class, jumping from 46 to 123 pages of emails in that time.

Thornhill thinks people upset at the name of his class need to settle down, take a breath, stop consuming inaccurate media, and develop authentic friendships with folks of color.

“It’s not a matter of, ‘They listen to me, I listen to them, and then we all get along.’ That’s not how it works, and the scholarship in this area that attests to the continuing significance of white racism is irrefutable. There is nothing to ‘concede’…The course is based on empirical work that has been rigorously peer-reviewed, and that’s what it is,” Thornhill said. “Perhaps they should sign up for a similar type of course in their area or online and consume media besides Fox News and Breitbart and Infowars, which are brainwashing them into a false understanding of our social reality.”

Alder said she was told by a critic of the class that “equality is unachievable” and that people of color should just accept these “lesser life chances.” But to her and Oliva-Infante, these beliefs just mean that “White Racism” has proven more than necessary at their university.

“When I’m feeling down, sometimes I feel that our community wasn’t ready for Dr. Thornhill, or ready for student activists like my crew and others,” Oliva-Infante said. “But at the same time, if it wasn’t us, then who else?…I think that this course gives us that the opportunity to dissect [white racism] and have this conversation with different white communities that, at the end of the day, we need their support in order to achieve justice.”