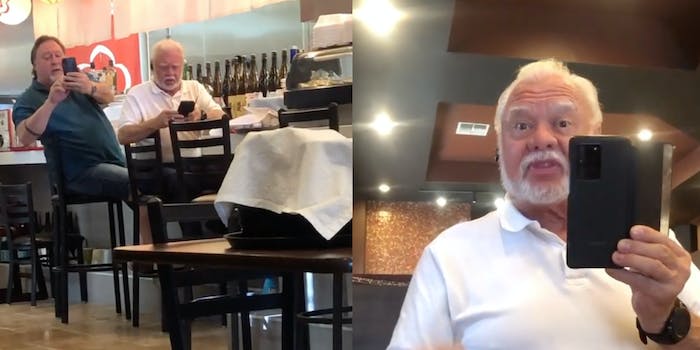 'The only way to stop you guys is to put you on camera.'

It’s been almost five minutes since the last video went viral for depicting a Ken or Karen haranguing a Black person for living their lives.

A pair of Las Vegas Ken’s decided to add their reaction to a fussy baby to the crowded flock of rude, entitled white people that have been taking over our social media timelines for months now. This latest demonstration occurred at a Japanese restaurant called Umezono Sushi and Grill.

The brief viral clip, shared to Instagram by the woman recording, begins as she explains the situation. Displaying the men seated at the restaurant’s raised bar, the mother—who goes by fiyameta on Instagram—tells viewers that “this guy is being completely racist because my 1-year-old is making noises.” The camera pans to momentarily show a chipper baby bouncing in a high chair.

The two white men can be seen waving away the mother’s words, but she presses on.

“Guess what? You’re going to go viral,” she says. “Because that’s the only way to stop you guys, is to put you on camera.”

The men invite her to “go ahead” with her video, pulling out their own phones in response.

“Shame on both of you, this world would be a much better place without you two,” fiyameta says.

As the argument continues, a server tries to diffuse the conversation. He approaches the men at several points and makes his way over to the mother and her 13-year-old sister appearing to apologize. Meanwhile, one of the men approaches their table with his phone out, seemingly filming.

Completely ignoring social distancing, the man makes his way across the restaurant to get in the mother’s face. Even as the woman continues to request that he keep his distance, the man continues on his tirade.

“This person right here has a children, right here, that makes a really loud noise,” he says, before being interrupted by the server.

Both the server and the woman request, several times, that he back away. When he refuses, the woman asks the server to call the police. In response, the man continues to blast a one-year-old child.

“Your children [sic] is making a lot of noise,” he says, yet again, before finally heading back to his fellow Ken.

Soon after, the server approaches and appears to ask the men to leave.

The brief clip ends there, with the seemingly peeved white men preparing to leave the restaurant. The mother said she felt like the interaction was racist. In the caption to the video, she described the situation she and her family walked into upon arriving at the restaurant.

“Walking in, I see them giving us the death stare, my body had chills,” her post reads. “It hasn’t even been 5 minutes before these two creatures started mocking my 1 year old, harassing us, calling my 1 year old daughter annoying. Calling me a radical left and telling me to keep her quite (sic) or else!”

The mom noted that she felt it was necessary to pull out her camera at this point. Right before she began filming, she said the man in white “said some derogatory, disgusting, racist comments” that she chose not to repeat. “God knows what else they were saying to the chefs that were in front of them.”

“I am so heartbroken for myself, my little sister but more importantly for my innocent, sweet baby girl Mila. This is the world we live in!!! This is America,” she wrote. “I am so sorry Mila, so lost for words.”

The Daily Dot reached out to fiyameta.