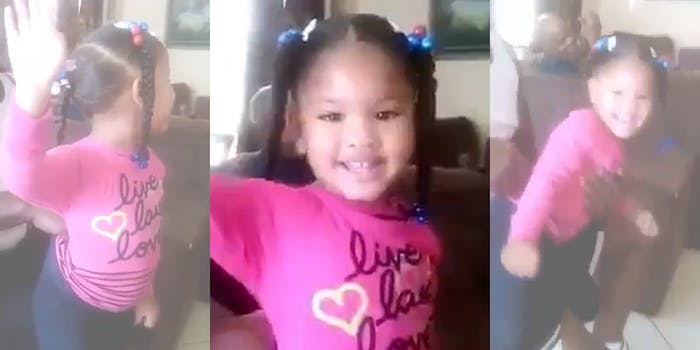 There's now a $100K reward for the capture for the killer.

LaPorsha Washington was out getting a fresh cup of coffee on Sunday morning when a man pulled up near her car and began shooting at her family of five. Her seven-year-old daughter, Jazmine Barnes, was killed.

Four days since the shooting, the killer remains at large.

The police have no leads who is behind the killing, but say it was absolutely unprovoked. The only information they have is courtesy of hazy surveillance camera footage taken nearby: The man is white, with a beard, likely in his forties, and driving a red truck. Barnes was with her two sisters in the back seat when the attacker began shooting at them.

“Any information, anything, I mean if it’s one letter of the license plate, if it’s something that’s hanging from his mirror, any little detail that you can give investigators about this truck, about this man,” Washington pleaded in a video for people to help identify her daughter’s killer.

Washington herself was shot in her left shoulder and has since been released from the hospital, according to KHOU11.

The shooting, which mirrors a previous drive-by shooting from 2017 where a white man in a truck shot a Black man a few miles away, has now gained national attention. Activist Shaun King has announced there is now a reward of $100,000 for his arrest (which started at $25,000).

We should not have to be doing any of this, but here we are.

Email me today at [email protected] with tips and leads. Strictly confidential. pic.twitter.com/IVrLajKJVm

The Harris County Sheriff’s Department tweeted out who and what they’re looking for, and people are trying to help by enhancing the surveillance photo with Photoshop and suggesting the make and model of the truck.

Just a thought, but since the positions of the camera and lights are known, can you use a little trigonometry to get the exact length of the truck and the exact height of the passenger window that is reflecting the lights?

this guy is probably a regular shopper at Walmart. Check surveillance tapes from previous Sunday's around the time of shooting, if available. People are creatures of habit. Check video at the self service counter, they may find a match their. They will find this guy very soon.

If the guy went in the store there should be footage of him in the store or parking his truck too. Most walmarts have more than a dozen cameras. That's the worst security footage I've seen in years too. Theres probably more but idk why they only show the one piece

Given the man is described to be white and Washington’s family is Black, the implication that this might be race-related is not lost on many.

All this hated because of skin color. And that idiot and his Worshipers think it's Mexicans that are the threats. But let a black person start this madness and the NRA will react then.

It's possible he removed it so he couldn't be found. That is premeditated! That could only he deliberately went out to kill a black person or group.

“We still don’t have any linkage to this particular family in any way,” Sheriff Ed Gonzalez said on Wednesday, “so it still seems random in terms of their acquaintance. But we’re not ruling anything out. We’re not tone-deaf to some of the concerns in our community where this could be potentially race-related.”

He remained shy of terming the attack as racially motivated, though.

“The nature of the crime and how random and heinous it was…just shooting into a car full of women. You know that’s alarming, that’s concerning to us. That angers us,” he said about this potentially being race-related. “I don’t want any way to minimize it [but]…it would be irresponsible for me to make that claim without fully knowing that that’s the linkage. If something develops, we’ll definitely be more specific.”

The family has started a GoFundMe called “Justice for Jazmine” for the expenses incurred by this tragedy.  A community rally will also be held on Saturday.