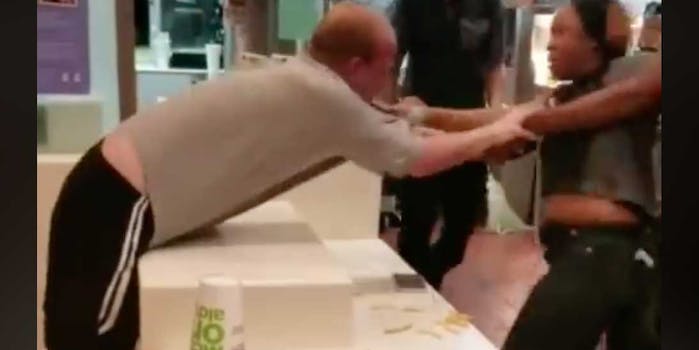 This entitled guy gets what he deserves in the end.

In a video now gone viral, a white man is seen pulling a Black female McDonald’s employee by the collar over what witnesses say was a dispute about a straw.

“A white male customer began arguing [and] belittling the young Black female worker because there were no straws out,” Biandudi told the Daily Dot. “She had kindly told him they are no longer allowed to put out straws because it’s illegal.”

St. Petersburg banned plastic straws and styrofoam just two weeks before the incident, though the plastic straw ban isn’t scheduled to go into effect until 2020.

It was during this verbal altercation that Biandudi and her mother began recording the incident. The audio is not clear, but within a second, the man reaches over the counter and grabs the woman by the collar. She immediately responds by landing a few punches on him.

Another employee tries to hold the woman back but fails. Eventually, the two are separated.

“I want her ass fired, right now!” the man says a bit after that.

Another verbal altercation ensues, while another McDonald’s employee holds the woman back and tries to remove her from the scene.

“I was just asking you a question,” the man screams. “Bitch!”

Biandudi told the Daily Dot the man later returned and tried to go behind the counter to fight the manager. She recorded the incident but it was accidentally deleted.

“After this fight with the young girl, the white guy came back more irate and actually went behind the counter and tried to fight the manager, who was a young Asian male,” she told the Daily Dot. “[Another] worker picked him up and pushed him outside, then locked the doors.”

“They told the guy he could not be behind the counter but the guy responded by cursing and wouldn’t move,” she said.

According to reports shared by Pinellas County Sheriff’s Office with the Daily Dot, the man is 40-year-old Daniel Willis Taylor. The sheriff’s office also made a second report of Taylor attacking and injuring another McDonald’s employee while he was being escorted out. Taylor was arrested on Monday evening by St. Petersburg Police Department, according to the sheriff’s office, and is being held on two battery charges.