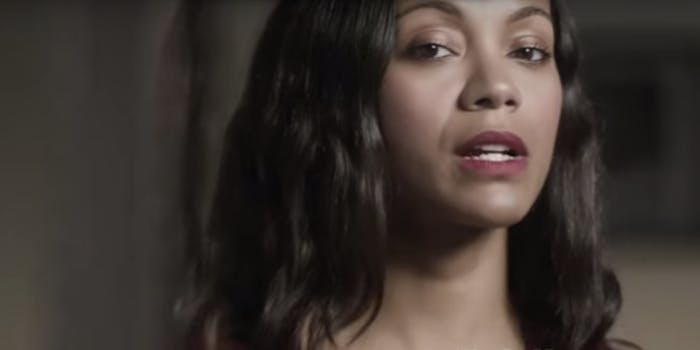 Zoe Saldana, other A-listers star in new PSA about consent

The video is from the White House initiative It's On Us.

What do Bennett from Orange Is The New Black and Uhura from Star Trek have in common? They both appear—well, Matt McGorry and Zoe Saldana, anyway— in a new PSA from by the White House about consent.

It’s On Us, a sexual assault awareness initiative launched in September of 2014, has released another PSA video, this time featuring Saldana, Minka Kelly, Nina Dobrev, Josh Hutcherson, and other stars.

Previous videos have featured stars like Kerry Washington, Questlove, and Common, as well as Vice President Joe Biden and President Barack Obama, all speaking out about sexual assault and encouraging others to get involved in preventing it. The emphasis on bystander involvement—stepping up to intervene if you witness misbehavior and the responsibility we all share for stopping sexual assault as a community—is meant to create a culture in which rape is unacceptable.

“The way most sexual assault messaging in the past has been, there’s a perpetrator and the victim and those are the two parties involved. If 6 percent of men on college campuses are assaulting women, then this 94 percent of men obviously are a much bigger group, and that is the group that can do something to stop it.”

The video released today addresses how important it is to obtain consent. “There’s one thing you can never have sex without,” Saldana opens. The video explicitly communicates that sex without consent is rape. “If you don’t get it, you don’t get it.”

According to OneInFourUSA.org, one in four college women report having survived a rape or attempted rape at some point in their lives. These statistics have remained the same since initial surveys in the 1980s. In addition, a full 5 percent of women on college campuses experience rape or attempted rape each year.

It’s On Us provides a toolkit for those looking to hold events on their college campus or in their community. The one-year anniversary of the campaign will be observed Sept. 17-19.