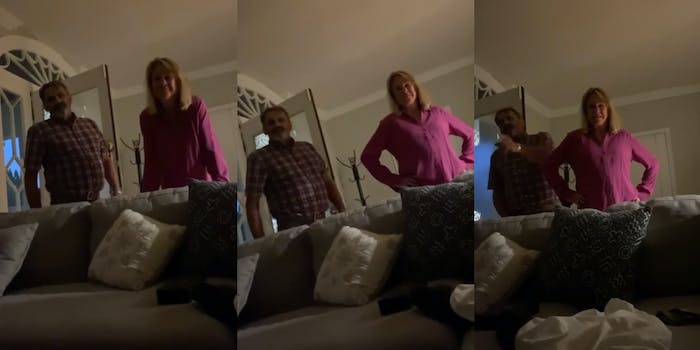 When pressed about their intrusion, the couple blasted the renter for pulling 'the race card.'

Coronavirus restrictions are beginning to ease in some areas of the world, prompting a return to some semblance of normalcy. That’s great news for Airbnb, which suffered a heavy blow early in the pandemic. But it may not be good news for the Black Airbnb renter who had a white couple barge into his rental and question what he was doing there.

The renter filmed his interaction with the couple. Political activist Shaun King shared the resulting video on Facebook on Monday night, where it has already received more than 17,000 reactions from viewers. It’s also received more than 12,000 upvotes on the r/PublicFreakout subreddit.

As the video begins, the renter behind the camera appears to be seated on the living room couch. The front door is wide open, and a white couple stands imperiously inside the home.

“Do you live here?” demands the woman, sporting shoulder-length blonde hair and a Karen-esque level of entitlement. She repeats her question as the man—presumably her husband—stands silently in the background.

“No, but why did you just come and open the door like that?” the renter asks.

“Because I live next door,” Karen responds, as her husband adds that the renter is “suspicious.”

“Because you saw Black people,” the renter says, framing it as less of a question and more of a statement.

The couple immediately backpedals, blaming their intrusion on fact that the man is “young.” The renter asks again if his skin color is to blame for their sudden interest in the home, and the woman again denies it, the smug look still plastered on her face.

“I’m disturbed,” the renter says, before asking how the couple would feel if he, a Black man, barged into their home unannounced.

“Yeah, that’s how I’m feeling,” the renter says. This finally urges the husband to apologize, as Karen hesitantly agrees to leave the renter in peace.

Then the renter borrows a page from the Karen playbook and begins to question the couple. When he asks again if his skin color motivated their trespassing, the couple becomes irate.

“Just stop it with the Black men,” Karen says, her voice full of annoyance. Her husband explains that they often see people coming in and out of the house—which in no way clarifies why they were so suspicious of this particular renter.

“I know the owner of this house,” Karen notes, as if this gives her the right to decide what is done with the property. A few moments later, she reveals that the owner neglected to tell her their plans for the home.

The renter asks how the couple thinks he gained access to the house, and they finally agree to leave (but neglect to close the door behind themselves).

In the video’s final moments, the renter steps out onto the porch to confront the couple one last time. He asks if they make a habit out of barging into other people’s homes.

“If you saw somebody walk into a house you knew was empty next door, you’d do the same thing, buddy,” the man says, before blasting the renter for pulling “the race card.”

The couple claims the house was vacant, contradicting their earlier defense of seeing people come and go consistently. The renter explains the property is an Airbnb, which is how he gained access.

By the end of the two-and-a-half-minute clip, the couple appears exasperated, as if the questions they were forced to endure were somehow more offensive than them barging into a stranger’s Airbnb unannounced. Thankfully, everyone appears to have made it out of the situation without police intervention.

AirBnb did not immediately respond to the Daily Dot’s request for comment.