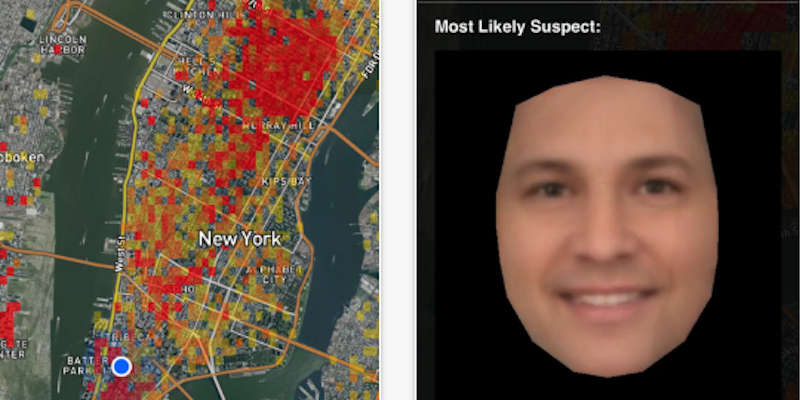 Nervous about all the underreported white collar crime going on in your neighborhood? Well, a new app launched Tuesday that uses machine learning to predict neighborhoods with the highest risk of financial crimes. So stay out of FiDi, New Yorkers!

“In some ways, it’s a troll, because financial crime is not location-based, but it’s also about the absurdity of predictive policing as a technology,” Lavigne told BuzzFeed News. “It’s both a troll and totally sincere—what if cops went to financial neighborhoods and stopped and frisked white guys in business suits?”

Users of the mobile app can sign up for alerts upon entering really “red” areas. Manhattan, especially Wall Street and Midtown, is littered with tiny red dots on the map.

The app also features headshots of CEOs to compile images of what potential offenders would look like.

The system relies on years of enforcement data from FINRA, a private financial industry regulator.

“We used FINRA data because it represented the largest available dataset about financial malfeasance that was tied to physical location,” Lavigne said. “From a predictive policing standpoint, they represent a pool of potential suspects.”

These suspects, however, have not been convicted of a crime. The developers are trying to point out another problem with the way the industry is regulated—not by police, but by private regulators who may not have the authority or motive to convict for the breaking of federal laws.

Tseng compared his co-creation to another app called Metadata, which notifies users every time a United States drone strike is reported in the news.

“Both these projects are about making violence that is difficult to see visible,” he said.

Check out the app here.