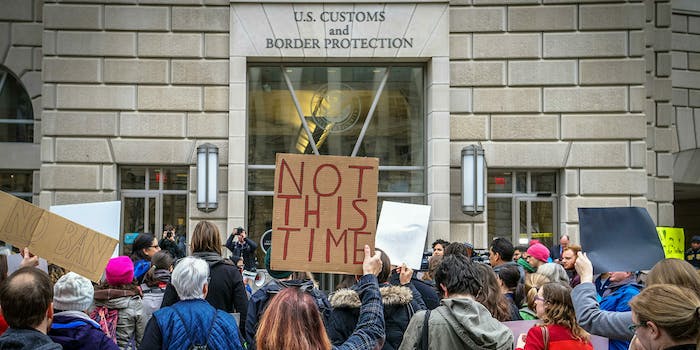 Where is the little girl crying in that viral border photo?

She’s been on the cover of Time, on the New York Times front page, and her image has even helped raise more than $16 million to assist local Texas efforts to reunite migrant families separated at the border.

Now, the 2-year-old Honduran girl photographed crying in McAllen, Texas, watching her mother be searched by U.S. Customs and Border Protection (CBP) agents, is somewhere in the system. But the government won’t say where.

The new cover of @TIME. pic.twitter.com/th6fdBWvcP

This is Trump’s America. What’s going to happen to this 2-year-old Honduran girl? The new policy is to separate her from her mother. Shame!!! pic.twitter.com/vy6HtRupQE

According to BuzzFeed News, the publication was told by a CBP spokesperson on Sunday that they were still “researching” the whereabouts of the girl and her mother, asylum seekers.

At the time, the spokesperson said that since the girl was “an infant” who wouldn’t be separated from her mother under the Trump administration “zero tolerance” prosecution policy “unless there is the criminal or immigration history of an adult in the family unit, evidence of abuse that would indicate that the child’s safety is at risk, questionable familial relationships (fraud), [or] insufficient detention space to accommodate a family unit where both parents are present.”

In other words, there were myriad other reasons that the child could be separated from her mother, aside from the mother being prosecuted for coming into the U.S. unauthorized.

After the Associated Press reported that babies were being separated from their parents and detained in “tender age shelters” on Tuesday, BuzzFeed News followed up and was told the mother and daughter weren’t separated and were in Immigration and Customs Enforcement (ICE) custody. A CBP spokesperson said he couldn’t say where the two were, or if the mother was being prosecuted.

BuzzFeed News was then told by two ICE spokespeople that they didn’t know who the mother and daughter were and that the agency couldn’t share the family’s whereabouts unless they were given the mother’s name and date of birth, as well as an alien registration number. When BuzzFeed contacted CBP again for this information, CBP said it couldn’t for privacy reasons.

Perhaps an attorney may spot the child and her mother, eventually, and put a name to this anonymous photo, memorializing a horrific moment in time. Until then, this viral photo has become all the more historic for these very missing facts.