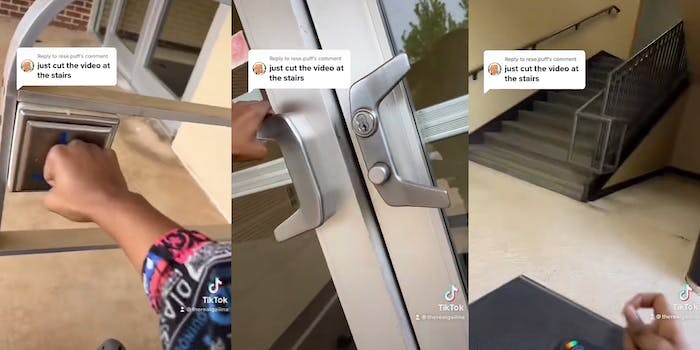 'What’s even the point of having a door opening button if u get in and it’s just STAIRS???'

In a viral TikTok video, a creator shows her difficulty entering a building through an intended “handicapped entrance” that is not accessible for her or her wheelchair.

“Wheelchair accessible, my ass,” she says.

The TikTok user @therealgailina pushes the button to open the door, however, it doesn’t open. She has to open the door by hand and push herself and her wheelchair through at the same time. “This is the second thing that didn’t work,” she says, referencing trying to enter the building another way previously.

As she finally enters the building, she sees that the entrance leads to stairs. “What the?” she exclaims.

The video was posted on May 24 and has since received over 1.4 million views.

According to the Americans with Disabilities Act (ADA) Accessibility Standards, which were first introduced in 1991 and were updated in 2010, at least 60% of all public entrances in new builds must be wheelchair accessible. While these standards are applied federally, individual states may have their own accessibility regulations in addition.

However, this viral video reveals that the accessibility of buildings are not always kept in check.

The video resonated with many viewers, as several noted the lack of necessary infrastructure accommodations for wheelchair users in the comments.

“I never noticed how bad people in chairs had it until my fiancé was in one,” one viewer said. “Even the basics. Baltimore has missing ramps on about half the sidewalks.”

“They should MAKE SURE IT WORKS EVERYDAY,” another commenter suggested.

Others were just as confused as the creator was about the design of the “accessible” entrance.

“What’s even the point of having a door opening button if u get in and it’s just STAIRS???” one viewer questioned.