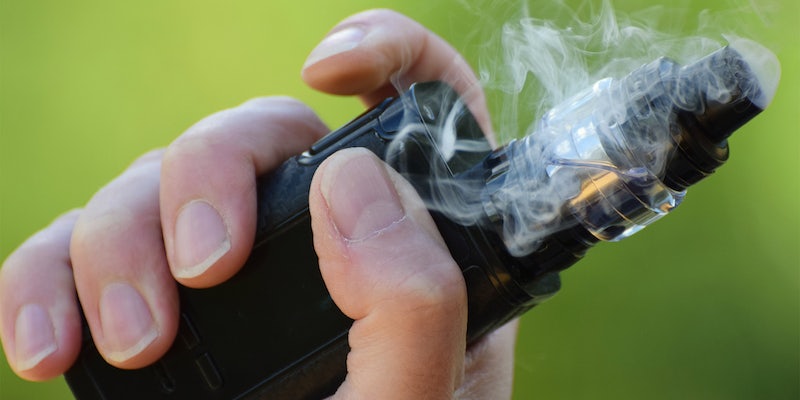 Everything you ever wanted to know about how vapes work

If you’ve ever heated up a portable or packed a volcano, you probably didn’t stop to think about how these newfangled contraptions actually get you high, or at least a nicotine fix. So what is vaping, technically? If you’ve never vaped cannabis or tobacco, it’s important to know the vaporization process before deciding to ditch your lighter for good.

Here’s everything you always wondered about how vaping works but were too afraid to ask for fear of being called a narc.

Vaping, or vaporizing, is the process of heating up raw plant matter or extracts, without combustion. Instead of burning weed, tobacco or hash, vaping gently heats up these substances to limit the release of harmful chemicals and maximize the plant’s intended effects. Cannabis is typically vaporized at no less than 285°F but no greater than 450°F, and tobacco vapes at temps between 250°F and 300°F. Vapor has more in common with a cloud of steam than with a puff of smoke. And even though vaping reduces the effects of secondhand smoke, it doesn’t mean you’re not experiencing a drug’s effects.

How does a vape actually work?

The properties of vapor differ depending on what you actually vape. Different substances, like tobacco or hash, or its different forms of substances like oil or plant matter, change the vaping process. Sometimes it’s the substance in gaseous form, and sometimes vaping means inhaling liquid particles suspended in air as they cool after evaporation. Either way, the effect is the same. Drug molecules are inhaled and land on the lungs, which have an enormous surface area to catch them. The molecules then pass directly into the blood and bypass the digestive system. From there, the effects hit your brain in about five seconds, which is almost as quick as injecting the substance.

According to vaporizer maker Veppo, about 90 percent of e-juice or vape juice is propylene glycol or vegetable glycerin. The rest is a mixture of water, food-grade flavoring, and nicotine (if you choose a vape juice containing certain levels of nicotine). Food-grade flavoring is the same type used in some processed foods.

Both PG and VG are used to distribute flavor and dilute. PG is used in vanilla extracts, food coloring, and some types of medicine to help distribute the taste and any food-grade flavoring evenly throughout the liquid. VG is a vegetable-based sweet thickener.

What can you vape?

Depending on the vaporizer, a variety of substances and forms of substances can be vaped. Cannabis and nicotine are common vaping elements, but hash, K2 (synthetic weed), salvia, heroin, and meth can all be vaporized. Just because something can be vaped, doesn’t mean you should vape it, though.

In the vaping world, hobbyists have also enjoyed success with legal substances like nutmeg, vegetable glycerin, and herbs like lavender and catnip. At the upscale Chicago restaurant, Alinea, chef Grant Achatz has even used vaping in his cooking. Achatz fills Volcano vaporizers with spices, then uses the balloon bags as placemats. Once the bags are filled, they are punctured in front of the customer, releasing aromatics intended to complement the dish.

Does vaping make it less likely to get caught smoking?

If you are in one of the 29 states and Washington D.C. that has legalized some form of marijuana, and you’re over the legal age limit for both tobacco and cannabis, then you have no need to worry about getting caught for either.

However, you’re most certainly less likely to get busted if you vaporize marijuana concentrates, waxes or oils, as opposed to dry flower. Yet, vaping weed nugs still smells like weed nugs. As for nicotine, vaping flavored e-cigs that release fruity or spicy smells can cover up the fact that you’re vaporizing. Just don’t expect people to be blind to the vape clouds rising up above your head. They may not be keen on the olfactory department, but they still have eyes, sweetie.

Is vaping “safer” than smoking?

Is vaping bad for your health? The idea that vaping is “safer” than smoking is a complicated one. For marijuana and other recreationally used substances, the main difference is the speed at which drugs are delivered to the brain. So, this means that you can get really high, really fast, and potentially engage in dumb or dangerous behavior. As for the “removal of combustion toxins,” little research has been done on how much better for you vaping weed is better than lighting it in a bong.

For people who smoke cigarettes regularly, Dr. Holly Middlekauff, professor of medicine in the division of cardiology at UCLA who completed studies on nicotine pens says, “I would not discourage a tobacco smoker from switching to e-cigarettes, but we need more research on vaping risks and how the two compare. I would definitely discourage a non-smoker from starting to use e-cigarettes.” Middlekauff’s 2017 study found that e-cig smokers were just as likely to experience cardiac risks and heart abnormalities as people who puffed regular cigarettes.

Middlekauff’s findings may seem obvious, misinformation about the “benefits” of smoking e-cigs is widespread. One unverified website suggested that e-cigs improve mental performance and intelligence. Another questionably sourced page outlines a plan for using e-cigs as part of a program to quit smoking. Unfortunately, it seems that vaping has led to more people addicted to nicotine, not less. A study conducted by researchers at Dartmouth College’s Norris Cotton Cancer Center estimated that kids and teens who vape are three times more likely start smoking cigarettes than ones who don’t. The study compiled data that found that in 2015, 168,000 American young adults who went from being non-smokers got hooked after only vaping once. By contrast, only 2,070 cigarette-smoking adults were able to use e-cigarettes to quit in the same year.

So if you don’t already smoke cigarettes, just don’t vape nicotine. It won’t make you any smarter and it will make it harder to quit.