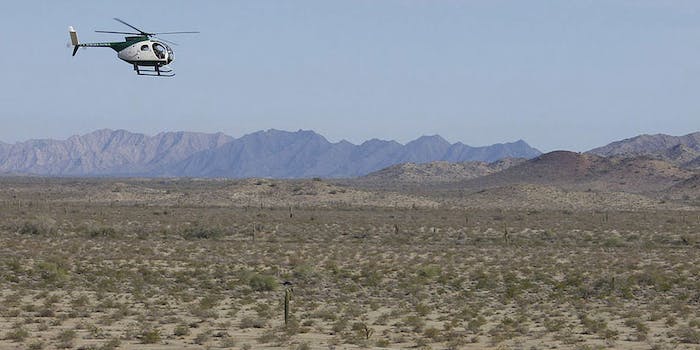 Sen. Jeff Sessions said he supports a return of Operation Streamline. So, what is it?

Zero-tolerance, fast-track prosecution, and jail time for undocumented immigrants found crossing the border is due for a return if Sen. Jeff Sessions (R-Ala.) is confirmed to head the Department of Justice.

The Department of Homeland Security initiative known as Operation Streamline was brought up by Sen. Jeff Flake (R-Ariz.) on Tuesday during a Senate confirmation hearing on Session’s nomination to be the next attorney general. And it’s sure to come up again as Sessions moves closer to becoming America’s top cop. Here’s what you need to know.

A spike in the number of undocumented immigrants crossing the border and overcrowded immigration courts lead to the creation of Operation Streamline in 2005. As the Washington Post recounts in its reporting of Operation Streamline, undocumented people who are caught illegally crossing the border have to appear in court in groups, which sometimes include more than a dozen people. A judge asks if they plead guilty, to which they answer yes. They are then sent to jail in detention facilities.

Nearly half of all immigration prosecutions on the border happened through Operation Streamline in the 2012 fiscal year—that’s nearly 200,000 people.

During Tuesday’s hearing, Flake commended the success of Operation Streamline in his home state of Arizona and asked Sessions what he plans on doing to restore the nearly 12-year-old program to the “zero-tolerance” approach, a move favored by fellow Senate Republicans John McCain (R-Ariz), Chuck Grassley (R-Iowa), Ron Johnson (R-Wisc.), and Sessions himself.

A “zero-tolerance approach” to Operation Streamline would mean that the program would once again prosecute first-time border crossers, which it stopped doing in 2014.

This is a nightmare scenario for civil rights and human rights activists who say Operation Steamline delivers “assembly-line justice” and results in many who could otherwise qualify for refugee or asylum status slipping through the cracks and being jailed in detention facilities.

But the greatest damage of Operation Streamline has already been done. The Department of Homeland Security (DHS) now refers more cases for federal prosecution than the DOJ‘s law enforcement agencies due to Streamline.

A 2015 DHS Inspector General report pointed out another troubling aspect about Operation Streamline: Border Patrol agents were unsure of what to do with captured unauthorized migrants who feared for their lives if they returned to their home countries. The IG discovered that Border Patrol agents would sometimes refer such migrants to Steamline for prosecution. Such behavior, as it turns out, is in violation of the United Nations Protocol.

“Using Streamline to refer aliens expressing fear of persecution, prior to determining their refugee status, may violate U.S. obligations under the 1967 United Nations Protocol Relating to the Status of Refugees, which the United States ratified in 1968. The United States generally will not return a foreign national to a country that threatens the individual’s life or freedom on account of race, religion, nationality, membership in a particular social group, or political opinion. Most aliens who fear persecution because of one or more of these factors may apply for various protections or relief from removal, including asylum.”

Prior to Operation Streamline, unauthorized migrants to the United States were deported, not placed in detention facilities.

“Operation Streamline is an unproven, wasteful program that has criminally prosecuted tens of thousands of unauthorized migrants each year,” says Grace Meng, senior U.S. researcher at Human Rights Watch. “Many are convicted of a federal crime for wanting to return to their families or for fleeing persecution and seeking refuge.”

Former Obama administration Attorney General Eric Holder in 2014 ordered U.S. attorneys under Operation Streamline to no longer include first-time border crossers and to instead focus on criminals and repeat offenders. The DOJ maintained that such a policy was to help packed detention facilities and courtrooms prioritize which illegal immigrants were most dangerous.

But Sessions has drawn a hard line on prosecuting unauthorized migrants as criminals, even first-time offenders. As Sessions said in a 2009 statement:

“Not only is illegal entry clearly a crime, but Operation Streamline, a highly successful border prosecution operation, is now in effect in four areas along the U.S.-Mexico border, where individuals are now prosecuted and incarcerated for unlawful entry into the United States. Illegal entries are down in these areas, which only makes sense. Simply returning individuals across the border without prosecution indicates that this nation lacks seriousness of purpose when enforcing our laws. Border police have been pleased by the deterrent effect that occurs from simply prosecuting these crimes.”

As a 2016 Congressional Research Service report states, even the fast-track Operation Streamline program is struggling to keep up with the flood of unauthorized migrants coming into the system. This has forced courts to cap the number of cases they hear per day and has lead to longer periods of detainment for unauthorized migrants.

“Although Operation Streamline has been described as a zero tolerance program leading to prosecutions for 100 pecent of apprehended migrants, the program confronts limits in judicial and detention capacity, resulting in daily caps on the number of people facing charges in certain districts,” the CRS report reads. “In the Tucson sector, for example, the courts reportedly limit Streamline cases to about 70 prosecutions per day.”