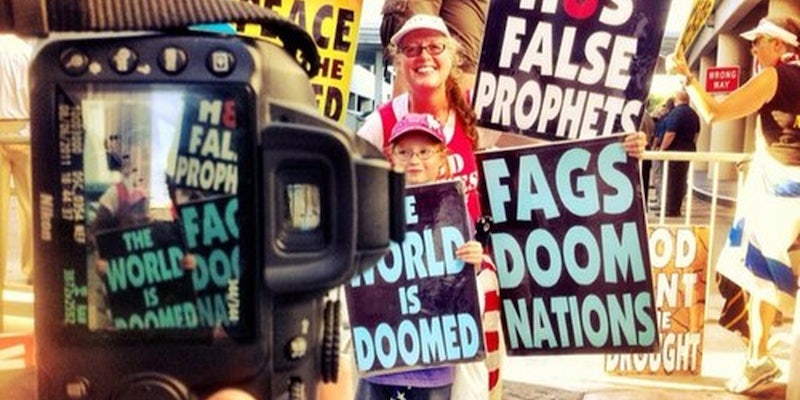 In an exclusive interview, Margie J. Phelps discusses the beliefs and social media strategy behind the controversial Westboro Baptist Church.

Regardless of your opinion of the Westboro Baptist Church, there’s no denying the effectiveness of its Web strategy. More so than any 4chan or YouTube troll, the disturbing religious organization has manufactured controversy online and off, using Twitter and Facebook to inspire vehement reactions to its signs declaring “God Hates Fags.”

“We’re not trying to one-up or fool anyone,” Margie J. Phelps, whose father, Fred, founded the church in 1955, told the Daily Dot. “[W]e’re trying to warn you of hell.”

Best known for picketing the funerals of celebrities, deceased members of the military, and other somber events, Westboro Baptist Church rose to prominence in the ‘90s, when members began engaging in “daily peaceful sidewalk demonstrations opposing the homosexual lifestyle of soul-damning, nation-destroying filth.” According to its own estimation, the church has held 48,521 demonstrations since 1991.

Recently, the church made news for announcing via Twitter its intentions to picket a memorial service for the victims of the Aurora, Colo., shooting. In response, Colorado residents organized a “human wall” to shield those mourning from the incendiary signs that are synonymous with the church.

In the end, the Westboro Baptist Church was a no-show, though this didn’t stop the group from tweeting a doctored image that placed them at the event. The Daily Dot covered the story and reached out to Phelps for comment on the Photoshop controversy. Unfortunately, Phelps did not respond to our email before publication. However, she did consent to an email interview.

In the following exchange, Phelps displays a keen understanding of how the Internet works and how the church uses the Web to its advantage. She discusses what she calls “flash-mobs-against-God” and the virtues of “virtual picketing.”

One final note, Phelps’s answers below have been edited for the sake of brevity. The arguments she makes, however, have been left untouched.

Daily Dot: You currently have close to 6,000 followers. Given that there are roughly only 40 members in your church, where do you think these Twitter followers are coming from?

I think they came from a variety of places. People hate these words and precepts we publish. But they are irresistible to the human heart. ‘For the word of God is quick, and powerful, and sharper than any two-edged sword, piercing even to the dividing asunder of soul and spirit, and of the joints and marrow, and is a discerner of the thoughts and intents of the heart,’ Hebrews 4:12. Some probably follow to virtually counter-protest me on social media.

DD: You personally tweeted that the Church would be protesting the funeral of Steve Jobs because he “gave God no Glory [and] taught sin.” Despite your objection and/or disdain for Jobs, the tweet was sent out via your iPhone. How do you reconcile condemning him with the fact that you’ve fully embraced the technology he created?

I am thankful God created the iPhone using that God-hating heathen to do so, all for His glory. Just like I’m thankful God created the Internet, Twitter, the Fourth Estate, and every other publishing outlet and means. They all exist for one purpose, to wit, to publish the words of the Westboro Baptist Church to this apostate world. That is the perspective Steve Jobs should have had. Instead, he thought he was smarter and more powerful than God. He used what God lent him to advance his cause, not God’s. He tried to steal God’s glory. That was a very bad plan. Today Steve Jobs knows what I am saying is true. He still rejects it; but he no longer mocks it. Sustained mocking during sustained torment is impractical.

DD: On your Church’s homepage, you have a link that says “Follow us on Twitter” that redirects to a page that lists the handles of many members of the Westboro Baptist Church. You personally signed up for Twitter in October 2009. Yet in 2010, the WBC protested outside of Twitter headquarters. Why target a company that makes it easier for the Church to publish its message?

The same reason we picketed Steve Jobs’ funeral. God gave the owners of Twitter a platform; they have a duty to use it to warn their fellow man of their duty to obey God and stop with the gross, proud sinning. Instead they use it to get rich and pimp filth.

DD: By and large, the Church’s main preoccupation is homosexuality. Why focus on this particular issue and not  on something like the Ten Commandments?

Homosexuality is forbidden by the Ten Commandments, and we do focus on the Ten Commandments. We didn’t make homosexuality the #1 issue on the airwaves in this nation. Whore false prophets and sin-hawking media did that. Our preoccupation is against sin and for obedience; we speak to what is timely and topical. The day this nation stops galloping toward same-sex marriage is the day we’ll stop talking about it. Of course, we both know that’s not going to happen. The preachers taught you to divorce/remarry (commit adultery), fornicate and become greedy self-centered idolaters – so they could get rich and be treated like holy rock stars. The end result of climbing down that ladder of depravity is a mocking, grinning, militant homosexual demanding to be publicly praised and given a government marriage license. That’s how it became the issue de jure; and that’s why we publish in warning against this great smash-mouth-in-your-face-sin-against-God.

DD: More and more individuals are organizing “human walls,” like the ones at Texas A&M and Aurora, Colo., to shield your protests. In both of these two situations, the church did not show up. In another instance, the funeral of a soldier held in Columbia, Mo., your protesters left fairly quickly. Was this because said walls were effective and were therefore a deterrent?

The ‘human walls’ (a.k.a. ‘target audiences’) are highly effective at publishing Westboro’s message. Literally to thousands. For many months—especially since the Supreme Court ruled our speech is protected in Snyder v. Phelps—at all our pickets, there are hundreds and sometimes thousands of people piled up outside. They have one purpose, to wit, to obsess, and rage about our words. The walls are formed in response to our words; the people forming the wall are thinking of nothing but our words; the media publishes scores of pieces about them anticipating our words. In my wildest dreams and most creative moments I could not have come up with this amazing and wonderful idea!

DD: In the case of Aurora, Colo., several church members tweeted a photoshopped image that purported that the WBC was there. The photo was quickly dismissed as fake. We reached out to you via email for a comment about the story. In your response, you wrote, “Photoshop is as good a tool as any to get words before people,” as if to acknowledge that someone had indeed doctored the photograph. How do you justify telling a lie, even if it might be a small one, to preach your greater message?

Photoshop is not a lie; it’s a photographic parody. We put our now-well-recognized-and-have-become-a-cultural-symbol-signs into the airwaves by many means, e.g., music videos, sign movies, faxed fliers, blogs, tweets, Web pages, Skype, holding them as we stand on a public byway, mimicked on counter-protesters’ signs, media republications, etc. Virtual picketing is as impactive as physical picketing. If Christ tarries in his return, we might hologram-picket. The Aurora shooting victims were watching The Dark Knight Rises. There is no Dark Knight and he isn’t rising. Yet you nitpick over how we creatively publish on the fact that Christ will return. We’re not trying to one-up or fool anyone; we’re trying to warn you of hell. I said it before and will say again: every person standing in that ‘human wall’ in Aurora had one thing on their mind, to wit, ‘God Sent the Shooter!’ If one of them might be brought to his or her knees in fear of God (the beginning of all wisdom), and moved in their heart to obey, that would be a matter of great rejoicing.

DD: Most of your signs use the phrase “God Hates…” Is there anything that God doesn’t hate? Is God loving or merciful?

Many of our signs accurately state ‘God hates,’ you are correct. The Bible speaks often of God’s hatred, abhorrence, and loathing for sin and proud sinners, whom He sends to hell for eternity. His hate is not a base human emotion; it is a sovereign right and plan to send impenitent disobedient reprobate sinners to hell. What He loves is a humble, broken, contrite heart. He has mercy for the merciful, obedient, mournful, sorrowful, ashamed sinner. He loves His elect; He hates the reprobate. You can read many, many details about this blessed doctrine at www.GodHatesFags.com. We have unfolded these beautiful traits of God Almighty in hundreds of ways to our generation. You will all without excuse on the Great and Terrible Day of Judgment for not inquiring diligently into this matter, and making your own calling and election sure.

DD: Some might characterize what the Westboro Baptist Church does as “trolling,” a term that often refers to individuals or organizations who say and do inflammatory things. Would you say that this is an accurate representation of the WBC?

In this vulgar society, that’s one of the nicer and more-printable things we’re called. We are watching a nation of illiterate, self-centered, woefully uninformed moral drunks sprint to the cliff and jump. What would be too inflammatory to try to stop them? If instead of a shooter, God had sent a giant fireball to the Aurora theater and you were standing by watching it burn, would it be inflammatory to scream, ‘Fire! Run!’ No! You’d be a selfish brute not to warn them.

Inflammatory is just a fancy way of saying, ‘I don’t like what you say.’ We are watching God raise the ante, and warning you that your destruction is coming. You don’t want us to say God did it, and you don’t want us to tell you it’s because of your sin. That is what you call inflammatory. We’re going to tell this nation about its duty to obey God, and again, we will use any creative means of doing that duty.