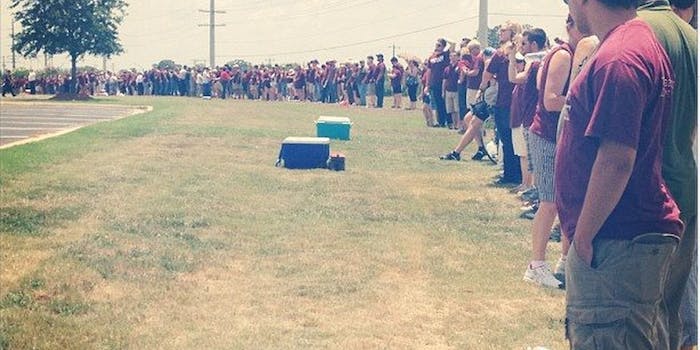 It’s safe to say that outside of its 40 or so members, not many people can stand the Westboro Baptist Church, which regularly pickets soldiers’ funerals with signs that read “God hates fags”, and sues opponents to cover their costs.

When 42-year-old Lieutenant Colonel Roy Tisdale, a Texas A&M graduate, was buried Thursday, Westboro threatened to show up. But Tisdale’s fellow Aggies weren’t having it.

Instead, hundreds of them gathered around the church where the soldier’s service was being held, forming a “maroon wall” to keep out protesters.

And Facebook users agree with them: more than 20,000 have shared a photo of the human barrier since it was uploaded Friday.

“Thank goodness there are still some true americans that stand up for what is right,” wrote Linda Hall.

The photo was reportedly Instagrammed by Emily Husk before being uploaded to Facebook by a local radio station.

As it happens, the Westboro picketers never showed up, and it’s unclear if that’s because they were intimidated by counter-protesters or if they never even really planned to attend.

“That is the same thing that was planned at Nathan Tyler Davis’s funeral in Yucaipa 2 weeks ago. But, the Baptist people didn’t show up,” wrote Luanne Magee.

“They were intimidated I think by all of the people who were going to protest against them,” she speculated.

Still, most users agreed that Tisdale’s friends and family surely appreciated the gesture.

“As a military wife that has delt with the w.b.b first hand at a very good friends service, I appreciate it and if I could hit like a million times it wouldn’t be enough,” wrote Sue Sny. “I love seeing communities come together like this to shield a battles family.”