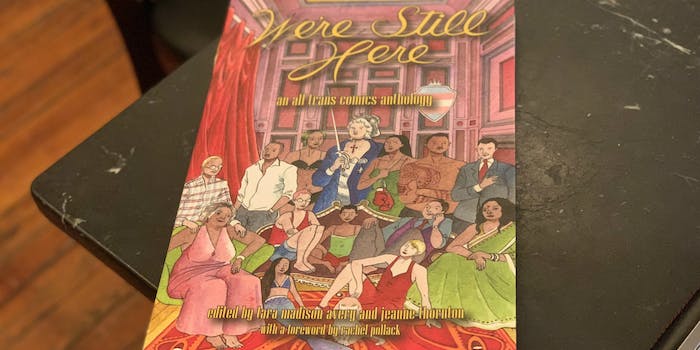 Get ready to feel less alone.

A little over a year ago, I stumbled across a then-upcoming book called We’re Still Here: An All-Trans Comics Anthology. Edited by comic creators Tara Madison Avery and Jeanne Thornton, the collection promised over 50 stories from some of the most popular trans writers and artists in the comics world.

Well, it’s out now, and it follows through on its ambition. Featuring Assigned Male’s Sophie Labelle and I’ve Got a Time Bomb author Sybil Lamb among others, there are 300 pages worth of comics that take on everything from presenting as a girl for the first time to mutant trans girls beating up cops. Avery considers it Chicken Soup for the Trans Comic Fan’s Soul.

“Whenever I’ve been at a convention with the book, the response from people in person has been unreal,” Thornton explained to me. “It’s this feeling like people did not know that they had this book-shaped hole in their comics-reading lives.” 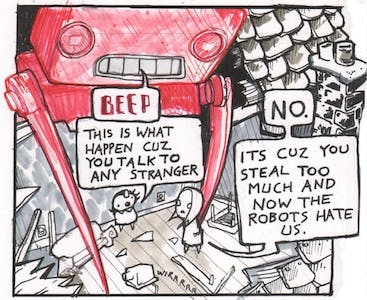 That’s a common feeling for trans readers. At a launch party for Topside Press’ Meanwhile, Elsewhere last year, Topside publisher Tom Léger talked about the literary awakening that arrived thanks to Imogen Binnie’s trans cult hit Nevada. For the first time, millennial trans women felt like someone was writing about their lives in a way that felt real. And the moment I read We’re Still Here‘s first preview, I felt the exact same way.

For me, the piece that punched me in the gut was Renée Triangle’s short comic “For Real.” Triangle’s story follows a trans woman named Keagan who presents as a woman while on a date with her partner. She has an incredible time, but as the day comes to a close, Keagan admits that she isn’t just dressing up as a girl for fun. She’s going back home to a world where she’s perceived as someone she’s not, and she needs to transition.

It’s a story that resonated with me, and will likely many others, because it reminded me of my first few times presenting as a woman. During my senior year of college, I would throw on women’s clothes, present as a girl, and go out for drinks with my friends. I felt so ecstatic being perceived as a woman. But then I would go home, put my clothes back in the closet, and face the fact that I had to present as a boy the next day for work and school.

Triangle’s comic ripped out a piece of my heart in the good way you want art to touch you. I know a cis comic creator couldn’t do that. Triangle could bring me back to that harrowing place I was at in my senior year because she knows what it’s like to live as a trans person. 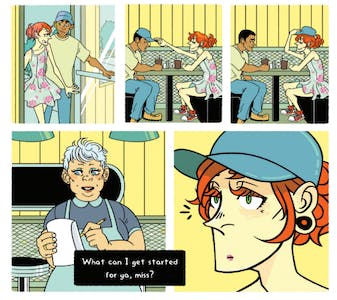 Thornton says one of the comics that spoke to her the most in the collection is Bishakh Som’s “Love Is Like a Cephalopod.” It tackles “this realization that desire can exist between” trans women, and what that means when queer trans women pine for cis girls over trans ones.

“Having to navigate that strange way we treat ourselves and treat one another, where so much self-loathing is baked into our conception of ourselves, so how does that transfer to people who are like us?” Thornton explained. “I don’t know, this is convoluted, but that one panel just gets at something to me.”

Then there’s the collection’s opening comic, Morgan Sea’s “Abominatrix” that follows Cherry and Trixie, two monster trans girls who use experimental feminizing hormone shots that bring wildly different results. While Cherry’s “Gamma Red” shot causes her to pass incredibly well, Trixie’s shot turns her into a large green monster that cis people regularly mock. The two rampage through buildings fighting, until they both realize that the desire to pass pits them against each other.

“I purposely wanted the book to start with Morgan Sea’s piece because it contains both kinds of content: trans women arguing across lines of social class and passability, but also trans women punching each other through buildings,” Thornton told me. “But that is what’s so good about comics! That it can do those quiet stories and it can do those PSA stories and it can do just crazy visual/action/dream-logic stuff, and you can navigate all of it.” 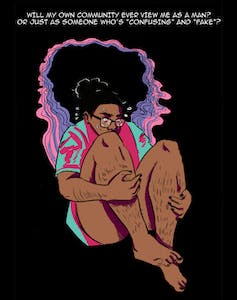 We’re Still Here isn’t just a trans comics collection about passing or coming of age, though. It has a bit of everything. There are stories like Kameron White’s “Out of the Box,” which explores how racist, patriarchal values push Black trans men into suffocating gender binaries. Kit Beukes’ “Deadname” follows a famous writer who haunts her abandoned mansion because the world only knows her by her deadname. And plenty of stories talk about the sexual politics that happen between trans and cis people, like “The Third Time’s the Charm” by Christianne Benedict, which tackles the ups and downs of a trans woman’s experiences while going on three separate dates with a cis man.

In many ways, We’re Still Here reflects the same conversations, concerns, and jokes that come up when trans people are alone with each other. And it’s all synthesized into a comics testament that spans every genre from science-fiction to horror.

“Trans creators telling trans stories gives you so much more than, say, dropping a trans character into Justice League or something,” Avery told me. “You can skip all the punching people through buildings parts and get to the stuff trans readers really want to see.”

We’re Still Here is for me and for people like me. Whether it’s through kinky sex or synching with mechs, the collection’s stories treat me as a real person whose story deserves to be told. It reminds me why I read books in the first place: To know I’m not alone.