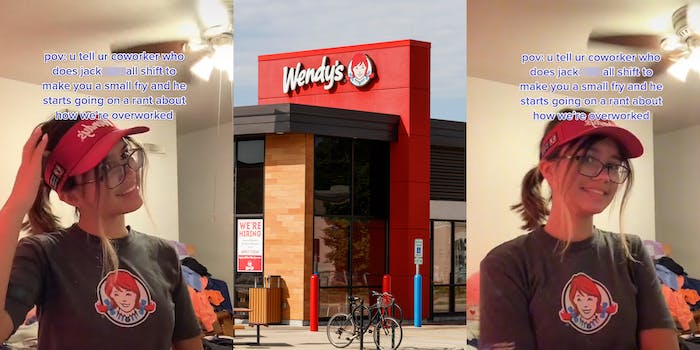 ‘These are the people who are always like an hour late to their shift’: Wendy’s worker says co-worker who does nothing complains about being ‘overworked’

'POV: u tell ur co-worker who does jack sh*t all shift to make you a small fry and he starts going on a rant.'

A Wendy’s employee went viral on TikTok after claiming that her co-worker who doesn’t do anything complains about being ‘overworked.’

The video only features the user Hailey (@hileyy) standing in a bedroom wearing her Wendy’s uniform. “Pov: u tell ur co-worker who does jack shit all shift to make you a small fry and he starts going on a rant about how we’re overworked,” the text overlay reads as the TikToker nervously scratches her head.

“Gotta hit em w the “damnnnn tbats wild,” she wrote in the caption.

The five-second clip has been viewed over 190,000 times since it was posted Aug. 1. Many viewers in the comments shared similar experiences to Hailey’s.

“Bro… I had a coworker who did something similar but instead ranted about me just for asking them to help with cleaning,” one user shared.

“I also work at wendys and i’m the only one that does ANYTHING i’m so close to quiting,” a second stated.

“I worked with someone like that and he got fired for trying to beat my ass cause I asked him to take a pizza out the oven,” a third wrote.

Others pointed out that their co-workers’ lack of action kept them from getting necessary breaks.

“Yesterday I had to wait 8 hours to go on my lunch,” one viewer wrote.

“Meanwhile me waiting for someone to show up so I can finally go pee,” another claimed.

A few people agreed that it’s usually the people who do the bare minimum who complain about being overworked.

“And these are the people who are always like an hour late to their shift (or just don’t show),” one TikToker commented.

“Restraining yourself from clocking the sucker who only clocks in and clocks out. I say give in,” a second said.

There was one user who asked why Hailey was doing more work than the co-worker.

“Whyre you trying to do more than him if youre getting paid the same amount and he gets away w doing no work,” the user questioned.

Her response was, “i don’t like being yelled at by customers lmfao.”

The Daily Dot reached out to Hailey via TikTok comment, as other methods of contact were unavailable.