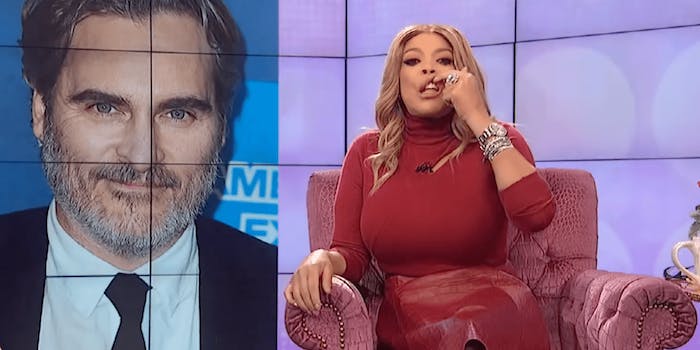 After daytime talk show host Wendy Williams made controversial comments about Joker actor Joaquin Phoenix by mocking his cleft lip and palates, a Change.org petition calling for her firing has earned tens of thousands of signatures.

The controversy began earlier this month when Williams mocked Phoenix, who’s made the award circuit rounds for his performance in the DC Comics film.

For a solid 10 seconds she used her finger to mimic a cleft lip while the audience laughed. Imagine how my 5 year old would take it if he saw it? @WendyWilliams

I only speak on it bc I’m personally informed and educated on the topic. #bebetter Do work Twitter pic.twitter.com/whfBbCVZE4

“When he shaves off his mustache, he’s got a hairline fracture,” she said during the Jan. 15 broadcast of Wendy. “He’s got one of those—what do you call it? Cleft lip, cleft palate.”

Williams then inserted her finger into the top of her mouth like a hook.

Corey Perry began the Change.org petition, titled “Get Wendy Williams Fired” earlier this month. The request now has more than 75,000 signatures. Perry made his urgent and angry plea, starting with all caps.

“MY VERY GOOD FRIENDS HAVE A SON, THIS IS A POST SHE MADE SO IM GONNA SHARE THIS ON HER BEHALF,” they wrote. “VAL AND ANDRE ARE SUCH AMAZING PARENTS TO BOTH THEIR CHILDREN. PlEASE READ THIS AND UNDERSTAND WHY WENDY WILLIAMS NEEDS TO GO. So this ignorant piece of work decided to mock Joaquin Phoenix and his ‘hare lip, cleft lip, palate’ on daytime television and even went as far as pulling her upper lip with her finger, she is a total disgrace.”

Williams later apologized for her comments. The discussion—and the petition’s existence—has called into question not only her employment but notions of celebrity cancellation via social media backlash.

Twitter user @groarkboysbbq sent numerous tweets to various outlets, including TMZ, to force (and hasten) the calling out and cancellation of Williams.

For a solid 10 seconds she used her finger to mimic a cleft lip while the audience laughed. Imagine how my 5 year old would take it if he saw it? @WendyWilliams

I only speak on it bc I’m personally informed and educated on the topic. #bebetter Do work Twitter pic.twitter.com/whfBbCVZE4

Many people with cleft lips have commented about their own experiences as young people being made fun of in schools and playgrounds.

Honestly I’m quite thick skinned about my cleft lip because it’s part of me and I can’t change it.. but seeing her do that gesture felt like a gut punch because it took me back to the playground when kids would do that to me.. and she’s meant to be an adult

However, existing on the same thread, others have also expanded the name-calling that Williams has long-endured relating to her appearance.

AN she is WAY old enough to KNOW BETTER than to be nasty like that …I was always told 'those in glass houses shouldn't throw stones'….. Ole' Wendell [oops I mean Wendy] needy to take a look in the mirror ! pic.twitter.com/NUN16gKTn2

As someone who had a cleft palate, well I found more of a reason to hate on her now. She has nerve talking about someone's appearance though. Go back in time Wendy. This is what you USE to look like. pic.twitter.com/J5ScfpPUqm

Williams has a long record of public spats with celebrities, to which these comments will be added. There are no reports thus far of her losing her daytime TV gig.