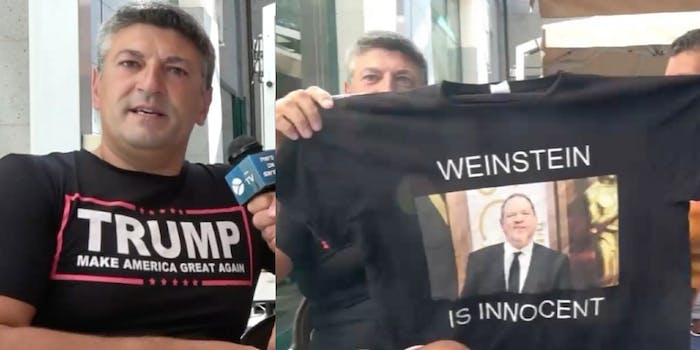 Behold, the worst image on the internet.

An Italian director apparently believes that charged sexual assailant Harvey Weinstein is innocent of the sexual harassment and assault allegations against him, put forth by more than 80 women.

The director, Luciano Silighini Garagnani, made his belief very clear by wearing the declaration at the world premiere of Suspiria, a rebooted horror film which had been originally directed in 1977 by the father of Asia Argento, who said Weinstein raped her in 1997.

At the red carpet premiere, Garagnani wore sneakers, jeans, a blazer, and a homemade black T-shirt with Weinstein’s picture, flanked above and below with the phrase, “Weinstein is innocent.” According to the Hollywood Reporter, actor Paolo Riva stood next to Garagnani on the carpet and pointed to the shirt.

Garagnani, a supporter of U.S. President Donald Trump and disgraced former Italian Prime Minister Silvio Berlusconi, is currently working on a film about Berlusconi, with Riva playing the former politician. In 2013, Berlusconi was convicted of paying for sex with a 17-year-old girl while in office. He was sentenced to seven years in jail.

Just fucking awful.
Seen today on @venicefilmfest red carpet.
Fuck this dude whoever he is and the dude next to him. pic.twitter.com/shg7NYmkVI

He's just told everyone that he is unsafe to work with/for.
I hope people respond accordingly.
His name is Luciano Silighini Garagnani https://t.co/ACC1xVI97j

In October 2017, the New Yorker published a report of dozens of women who said Weinstein had harassed or assaulted them. The expose led to many more women coming forward against, not just the Miramax mogul, but other alleged predators in Hollywood, instigating the widespread Me Too movement. Weinstein has since been charged for sexual assault, abuse, and sexual misconduct in New York, and is undergoing investigation in Los Angeles and London.