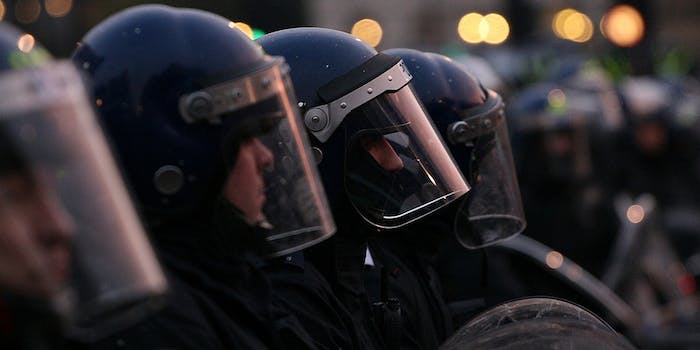 Talk about an inflammatory mistake.

A local Fox affiliate in Baltimore has apologized for inaccurately reporting that anti-police-brutality demonstrators chanted “kill a cop” at a recent protest.

“Setting the record straight means a lot because I care about all people.”

As Gawker first pointed out, however, WBFF Fox 45 edited the footage to cut out the last line, and the news anchor claimed Jones’s chant of “Till killer cops …” as “Kill a cop”—a call for the murder of police. The segment was part of WBFF’s coverage of this weekend’s vicious murders of two NYPD officers, linking the anti-police violence movement to violence against law enforcement officers.

Here is the WBFF version of Jones’s chant:

Here is the unedited version, via C-SPAN:

Baltimore Bloc, a community activism group that has participated in dozens of Jones’s “West Wednesday” demonstrations held in an effort to bring attention to the kind of police violence that led to her brother’s death, called out WBFF for their errant report in a statement posted to Facebook, and said that Jones and her family are “peaceful, honorable, and consistent in their message of non-violence.”

This editing and the anchor’s words deliberately link not only the anti-brutality movement in general, but specific local activists to the murders of police, thereby endangering the safety and lives of those activists. Tawanda Jones and the West family have led over 70 demonstrations since last summer, and every single one has been peaceful. The West family has repeatedly called for non-violence in the movement and for an end to all types of violence, including the violence by Baltimore police that took their beloved Tyrone from them. They have never condoned or called for violence against police officers.

In a statement published on WBFF’s Facebook page on Monday, the station said it misinterpreted Jones’s chant, though it did not exactly offer a correction, saying instead that Jones told them they had misreported what she said. As a follow-up, they invited Jones in for an interview, which she accepted.

“Setting the record straight means a lot because I care about all people,” Jones told WBFF during her interview. “And it touched me so bad when I heard that those officers were brutally murdered, because the first thing I thought was the pain that I’m feeling with the death of my brother. Nobody deserves to be brutally murdered.”

WBFF anchor Jeff Barnd issued a correction for the story during his Monday night broadcast, and said the “kill a cop” report was due to an error, not intentional misrepresentation.

“When you do a news story, it usually goes through a lot of desks,” Barnd said. “A lot of brains look at it. And it’s unfortunate that it made it on our air last night.”

Blue Lives Matter is a direct response to the burgeoning Black Lives Matter movement that erupted after grand juries failed to indict the officers who killed two unarmed black men—Michael Brown in Ferguson, Mo., and Eric Garner in NYC—this summer.

Photo via bobaliciouslondon/Flickr (CC BY 2.0)