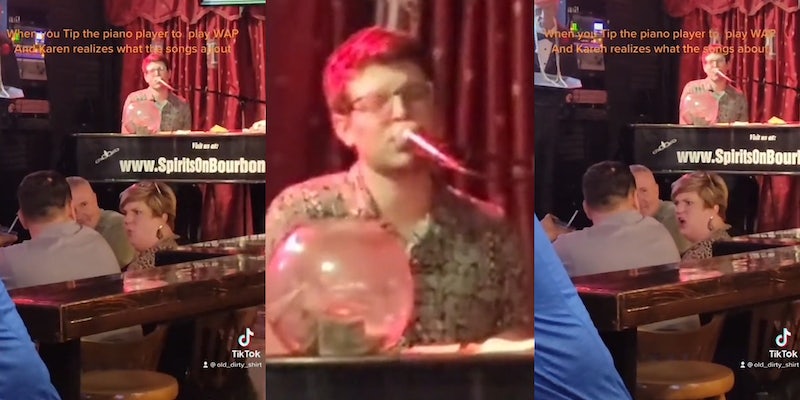 ‘Karen realizes what the song is about’: Woman’s reaction to pianist’s rendition of ‘WAP’ on Bourbon Street goes viral

'She was loving it at first.'

A woman’s reaction to a pianist playing his rendition of “WAP” for Bourbon Street-goers has earned her the “Karen” moniker online.

“When you tip the piano player to play WAP and Karen realizes what the song is about,” the voiceover in the video says.

An arrow in the video points to a woman with short, blonde hair sitting at a table in front of the piano player. She seems to become appalled while listening to the rendition and mouths “this is awful” to her acquaintances who are seated next to her. She is being filmed from afar, presumably by a person at a nearby table.

The people who are accompanying her, however, seem to laugh at both the song and her reaction to it.

“Ma’am you’re on bourbon street what you thought you was getting?This lil light of mine?!?” one person quipped.

“It’s the French Quarter, not a Southern Baptist convention,” another argued.

Joe eventually posted the full video with the text overlay: “I almost felt bad getting him to do this.”

While the woman laughs at the beginning of this video, her reaction shifts as the video progresses.

Some viewers in the comments section pointed out how the woman was enjoying the song before noticing the lyrics.

“Haaaaaaaa! She was loving it at first,” one said.

Putting the woman’s reaction aside, viewers in the comments section praised the pianist with the lyrics to the Cardi B and Megan Thee Stallion song.

“The fact that the piano player doesn’t even need to look at the lyrics,” a viewer pointed out.

“He really been waiting for this moment bc he knew every single word,” another said.

The Daily Dot reached out to Joe via TikTok comment.