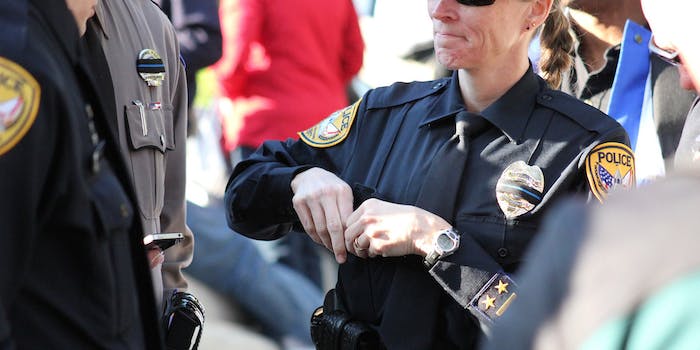 Meanwhile, officials have yet to address whether race was a factor in the shooting.

The mayor of North Charleston, S.C., has ordered every city police officer to be outfitted with a body camera after an anonymous citizen’s video recording of an officer shooting dead an unarmed black man led to that officer’s arrest on murder charges.

Mayor Keith Summey announced on Wednesday that he had purchased 251 body cameras, and that, once a policy was in place, the entire force would be trained to use them.

Mayor Summey: City orders 150 body cameras after #WalterScott shooting, in addition to 101 already ordered, so every officer gets one.

Summey made the announcement at a new conference following the shooting death of Walter Scott, 50, by Officer Michael Slager, 33, of the North Charleston Police Department. Summey was interrupted on multiple occasions by protesters chanting “No justice! No peace!”

Slager, who is white, is currently being held without bond. He has also been fired from his job, the mayor said. A court date has not been set for his hearing.

Mayor Keith Summey says he and his wife visited Walter Scott's family today. There to support them in the future. #chsnews

Summey added that both he and Police Chief Eddie Driggers had visited Scott’s family.

“They’re suffering,” he said. “We let them know how we felt about their loss and how bad it was. We do not condone wrong; it doesn’t matter who it is.”

As the mayor concluded his news conference, protesters began chanting again, this time calling for his removal from office.